Customized for homeschooling, Investigations and an Illustrated Glossary, 120 Lessons: Each daily lesson includes warm-up activities, teaching of the new concept, and practice of new and previous material, two-color format, 744 pages.

Powered by TurnTo
Review More Purchases | My Posts
4.8 / 5.0
11 Reviews
5 Stars
4 Stars
3 Stars
2 Stars
1 Star
9
2
0
0
0
Long but helpful
I find the Saxon math workbook to be quite time consuming. With that said, my 2 children that are using this book are gaining ground with understanding and consistency by doing the hard work it takes to complete every single problem. I think 6-8 grade math is so essential for every day life in adulthood so these are the books I want my kids to really understand well and know how to do the math correctly.
October 19, 2020
Esther J
Purchased
2 months ago
Nice textbook
Requires answer key book separate. Teaches the items step by step. Good step up from our normal workbook type exercises for a real 'junior high' experience. I bought a graph paper pad for my child to use to write and solve the problems. It allows for easy lining up of digits on complicated multiplication problems, etc. I see why this is a popular series.
August 26, 2020
Matthew
Purchased
2 months ago
Tried so many...Always come back to Saxon Math
My Family and I started with Saxon Math. Then we jumped around to teaching textbooks, VHGS ( Virtual Homeschooling Group ) and Shormann Math. We have found the combo of Dive In Math Cd's, Saxon Math workbooks, My Math Assistant and Dad's help to be the best fit yet for our family.
June 14, 2020
Kimberly B
Purchased
5 months ago
This is a great book
February 18, 2020
Terry G
Purchased
9 months ago
perfect for my 5th grader
after a few weeks of using this program, I think we found what we needed. Lots of review, no distractions. Easy to understand lessons. The daily practice is a bit of "over kill", but you have a choice :) to skip the ones easy for your student
February 10, 2019
Lenka W
Purchased
1 year ago
Perfect! Let my daughter test out of the beginning. Exactly her level.
January 15, 2018
Rachel O
Purchased
over 2 years ago
Another great Saxon product
You either love Saxon or hate it. It's been a great product for my boys. I let my boys "test out" of the 1st 10-20 lessons to help the year get off to a jumpstart and to skip so much of the beginning review.
September 28, 2017
Melissa S
Purchased
over 3 years ago
Saxon is the best!
We use Saxon with all our kids the whole way through. It's great for the kids that aren't gifted in math because of the constant review. You do need to have the student correct their wrong answers, but that is how they learn. Friends have switched to other math programs and then have switched back. My kids do well on the standardized tests.
July 31, 2016
Amy T
Purchased
over 4 years ago
Like the math program, but books are cheaply printed
I like Saxon Math for middle and high school and highly recommend it. However, the 4th edition printing is on cheap paper with paper covers. Also, there isn't a teacher's guide to let us know when to schedule tests, quizzes and investigations.
May 6, 2016
Christina T
Purchased
over 4 years ago
Highly Recommended
This series is, by far, the best math series I have seen. We have been using Saxon from middle school through high school and the incremental approach, with continuous review, is the best approach for retention. Having taught algebra on the college level, students will be well prepared for success using these books.
April 18, 2016
Phillip F
Purchased
over 4 years ago
Buying Saxon has been the best decision I have made for math since I started homeschooling! My daughter struggled with math until we started using Saxon She is in the 5th grade and is doing the level 7/6 with ease now! The value offered by Rainbow makes the decision to use Saxon even better! With this program there is basically NO teacher prep She just sits down and goes to work each morning If your kid is a good reader they will have no problem with this program in the middle grades A friend with younger children says there is a lot of teacher prep for the elementary level but the middle school levels are written to be almost self teaching [Editor's note: there is a lot of teacher involvement in K-3 but actual prep is minimal]I feel that both of my kids have progressed rapidly since we started using Saxon (My son uses 8/7 in 7th grade) Comparable with A Beka in work for student but a lot easier to understand in my opinion And cheaper when ordered through Rainbow for sureAlso don't be afraid to order Rainbow's bargain books! I ordered the teacher's guide separately from the bargain books and it was in fine condition!
February 23, 2010
Kendal B. 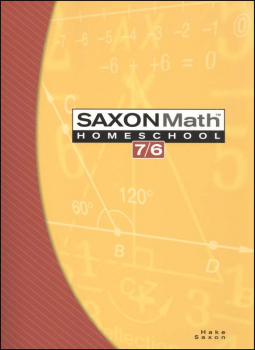