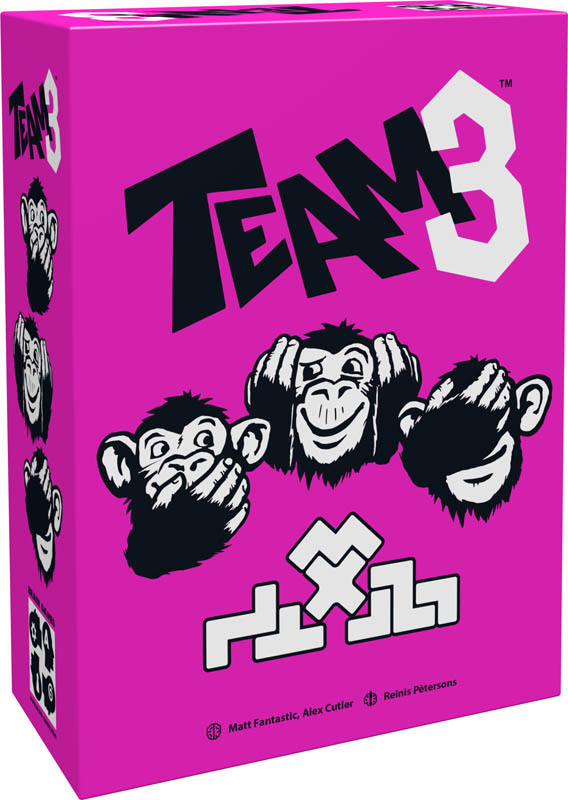 Imagine the phrase "hear no evil, see no evil, speak no evil was told to three people trying to build a structure, and you have Team3! The first player draws a blueprint card with a very specific configuration of the 5 colored blocks. He "describes the card using only gestures; the "monkey in the middle verbally translates these gestures for the third player, who must build the structure with his eyes closed. Hilarity ensues as the builder fumbles with the blocks, the translator tries to interpret, and the architect struggles to convey the vision! Beyond the fun and mental challenge, it's also a great way to build communication skills. Each box comes with 2 sets of blocks for head-to-head play. 3-6 players; ~ 10 minutes per round.

The Green Set includes the expansion "Mind Merge which challenges the builder to construct 3-block structures with both their left and right hands.

The Pink Set contains the expansion "Dimension Tension, where the players must stretch their minds to build a 3D structure out of a 2D image.

TEAM3 is a cooperative game that delights both players and spectators! Players must work together to build a structure using 3D pieces as fast as possible. But there is a catch, TEAM3 is played in teams of three players, with each player taking on one of three special roles: the player who cant speak, the player who cant see, or the player in the middle. Each role requires different skills, and this creates a very engaging game full of discoveries and challenges.

There are two different set's of TEAM3. PINK and GREEN. Each comes with its own set of blueprints and a mini expansion. Mini expansions for TEAM3 PINK is called DIMENSION TENSION, for TEAM3 GREEN - MIND MERGE. 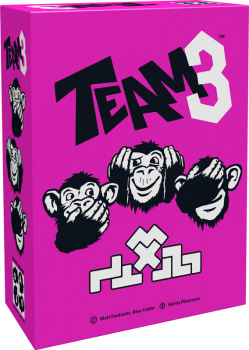