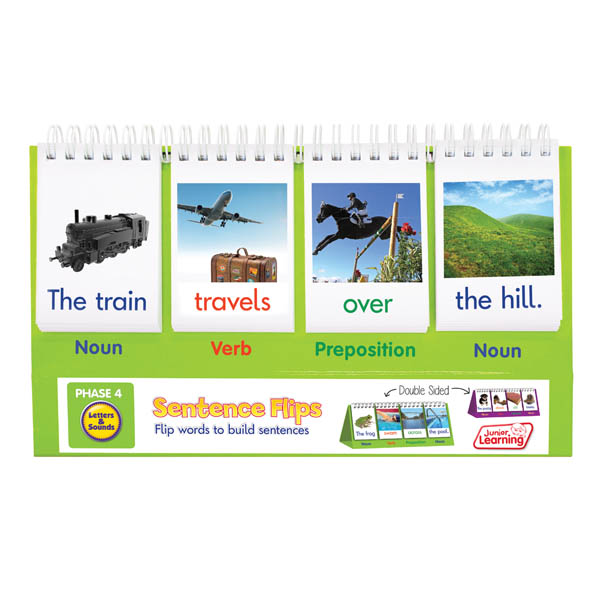 Well, this is a fun way to interact with the building blocks of a sentence! A spiral easel has 4 decks of colorful photo cards in a row, each with a word at the bottom. On the easel itself are the words noun, verb, preposition, and noun (aka the direct object). As you flip the cards, you make a new sentence and there are loads of combinations. For example; The frog/swam/across/the pool. The cards are also 2-sided, so you can have two students interacting with grammar at a time. Take turns flipping a card and read the new sentence to each other! Some make sense, others are silly. Includes a total of 80 images and words to flip around. The one-piece unit stands easily and folds mostly flat. Measures about 9.5” x 4”, with the base of 9.5” x 2.75”. ~Sara

Sentence Flips is a double-sided flip stand which enables students to build new sentences. On one side are words made up of blends, and on the other words that contain different vowel patterns. Flip stand teaches nouns, adjectives, verbs and punctuation. Picture examples are provided to support sentence building.

Primary Subject
English/Writing
Grade Start
PK
Grade End
1
EAN
858136006058
Format
Other
Brand Name
Junior Learning
Weight
0.4 (lbs.)
Dimensions
5.88" x 9.75" x 0.62"
Powered by TurnTo
Questions that need answers | My Posts
Start typing your question and we'll check if it was already asked and answered. Learn More
Do not include HTML, links, references to other stores, pricing or contact info.
My question is about: 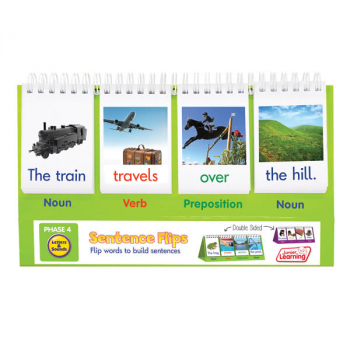