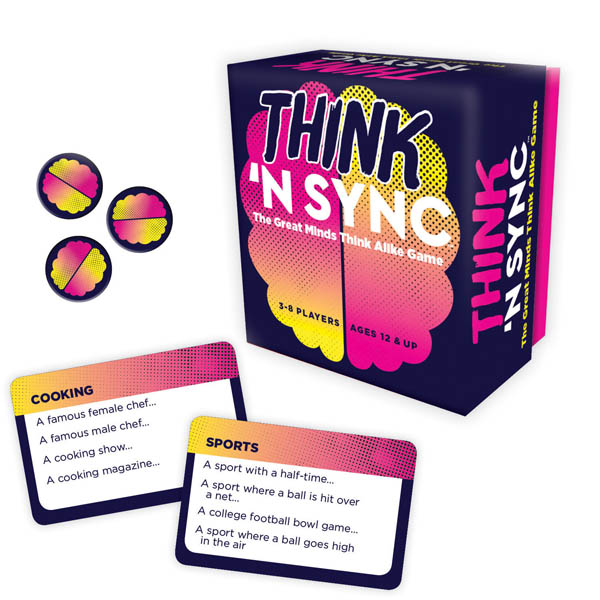 A hilarious, easy-to-play party game for up to 8 players, this one has a small footprint and can easily be taken on the go. The small box holds 225 cards, each with a category and four sub-categories. One player acts as the reader and reads the sub-categories to two players. As each is read, the two players try to give the same answer simultaneously to win a token. For example, one card category is "Bugs" and the first of the sub-categories is: "A bug that has many legs" If the players both say "centipede" at the same time, they would both win a token. The reader continues through all four sub-categories on the card, and the players win tokens for all identical answers. For 3-8 players; even players younger than 12 can play, especially in a family setting. - Jess

3" 2" 1" Sync! Meld your minds in this hilarious party game of quick connections. Pick a partner and then, at the same time, shout out an answer to the chosen category. Can you both name a movie princess? An ice cream flavor? How about something orange? Your answers may be great, but they only score if they';re identical! So think quickly, think cleverly, but most importantly- Think n'; Sync!

Primary Subject
Games, Puzzles & Toys
Grade Start
7
Grade End
AD
EAN
0759751011086
Format
Other
Brand Name
GameWright
Weight
0.7 (lbs.)
Dimensions
3.69" x 3.38" x 2.12"
Powered by TurnTo
Questions that need answers | My Posts
Start typing your question and we'll check if it was already asked and answered. Learn More
Do not include HTML, links, references to other stores, pricing or contact info.
My question is about: 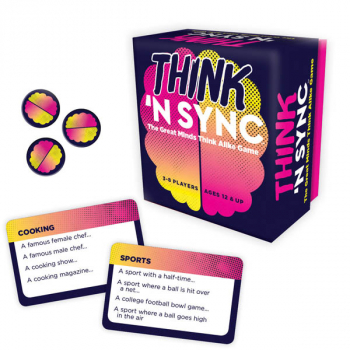