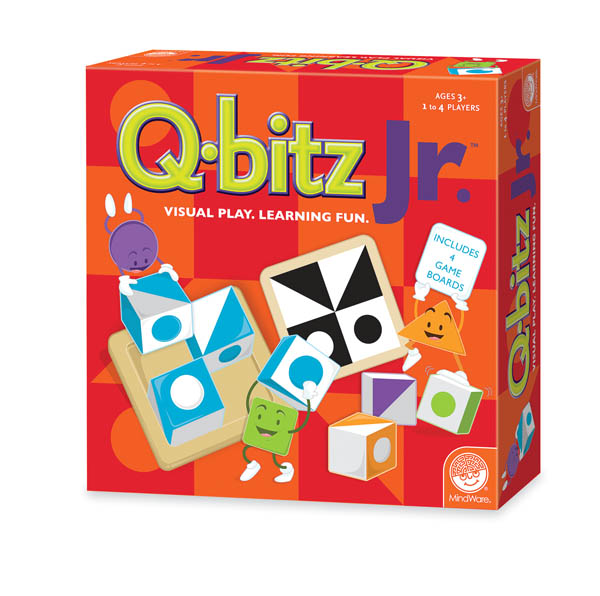 This Jr. version is much easier than the regular Q-Bitz game: great for younger kids starting to learn patterns, visualization, and problem solving! Play round 1 by flipping over a patterned card; then up to 4 players try to recreate the pattern with four cubes! The first player to recreate it shouts, "Q-bitz," and gets to keep the pattern card. Play Round 2 similarly except players must roll all their cubes and then try to recreate the pattern as much as possible. Players continue to reroll the remaining cubes until the pattern is fully recreated! The player with the most pattern cards after three sets of two rounds wins! Game includes 60 Q-bitz cards, four wooden trays, and four sets of cubes. 1-4 players

Bring the fun and learning of Q-Bitz to a younger audience. Q-bitz Jr. is a wonderful way to introduce children to pattern matching, spatial reasoning, problem solving, visualization and more. Gameplay is simple, each player has a set of 4 same-colored cubes and a sturdy wooden tray. When someone turns over a pattern card, players race to try to recreate the pattern with their set of cubes. The first player to match the pattern wins the card. The player with the most cards after six rounds wins the game.

Crack those knuckles and dust off the mind - it time to test your visual speed and memory! Each player (up to 4) gets a tray with 16 cubes. The cubes all have the same arrangement of patterns on each ride: dots, solids and triangles. In round 1, the top pattern card is turned over and players race to match the pattern. First player to correctly do so wins the card. Round 2 is slightly different: flip the card over and then roll all of your cubes like dice, using only the side that's rolled up. You can re-roll as much as needed, but only the fastest player will win! In round three, players get 10 seconds to memorize the card, and then must use any side of their cubes to recreate the pattern from memory. The player with the most cards after 3 sets of 3 rounds wins the game. Speedy and challenging, it is easy to learn, but challenging to play. 120 pattern cards are included.

Powered by TurnTo
Review More Purchases | My Posts
5.0 / 5.0
2 Reviews
5 Stars
4 Stars
3 Stars
2 Stars
1 Star
2
0
0
0
0
Rated 5 out of 5
Spatial Awareness
Great game to help develop spatial awareness.
January 16, 2021
Elise R
Purchased
1 year ago
Rated 5 out of 5
great game for patterning
I bought these for my sons (4 and 3 yo) and it seems to be a great way to work on patterns while exercising fine motor skills - the 4 pieces of blocks are not that big, so the kids can manipulate it easily with their fingers. I highly recommend them.
August 28, 2018
ko eun b
Purchased
over 4 years ago 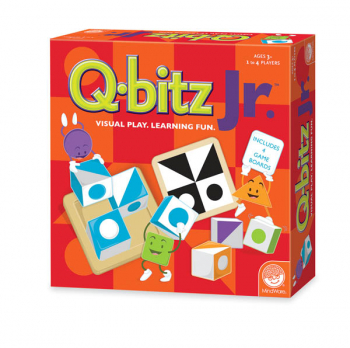