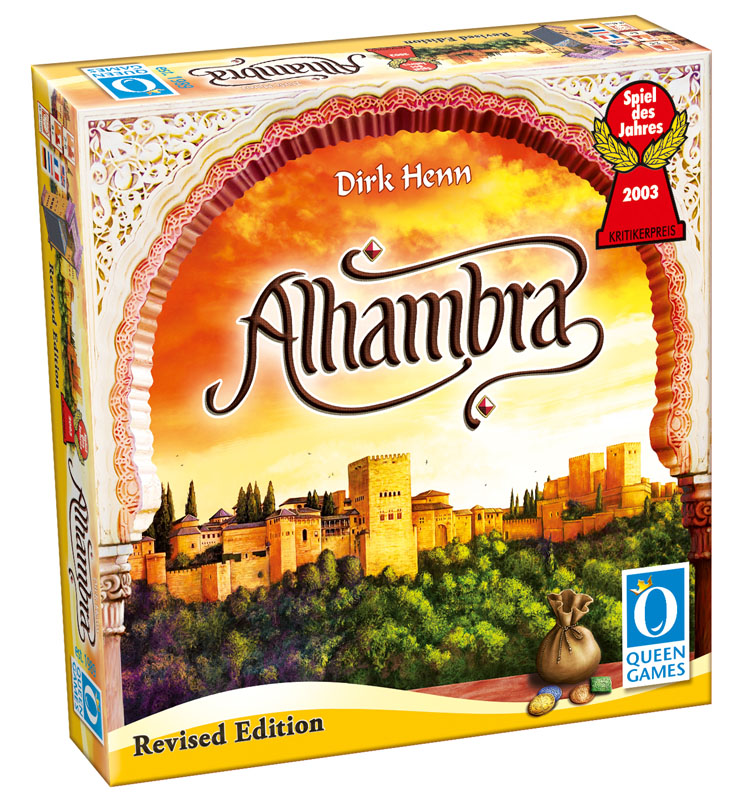 Granada, 1278. You and up to five other architects have been commissioned to create the most splendid palace and fortress complex in all of Spain: the Alhambra. Master builders and workers from all over have come to show off their skill and aid you in this projectfor substantial fees, of course. To make matters worse, all workers wish to be paid in their national currency!

The objective of the game is to construct the most of certain types of buildings in your Alhambra: Pavilions, Gardens, Towers, and so on. Each turn, players perform some combination of buying building tiles, taking money, or redesigning the Alhambra. The trick is that all building tiles come with a variable currency and cost, and you dont get change (or get to keep buying) if you pay more than the necessary amount. Once you acquire tiles, you can add them to your existing palace. Tile walls represent another hazard to construction: certain building tiles include sections of wall which must be connected to other walls in the Alhambra. Making things more complicated are mid-game scoring rounds; throughout the game, randomly-placed scoring cards will be drawn from the money pile. These initiate a round of scoring, rewarding each player who currently has the most of a certain type of building. Once all building tiles are exhausted, the game ends, and a final scoring round takes place. Make sure to manage your resources carefully, lest a more successful architect snatch victory out from under you! Duration: 45-60 minutes. 2-6 players. Winner of a Spiel des Jahres award in 2003.

In Alhambra, players are acquiring buildings to be placed within their Alhambra complex.

The money in Alhambra comes in four different currencies and is available in the open money market. The 54 buildings of six types become available for purchase in the building market four at a time; one building is available in each of the four different currencies. On a player's turn, a player may 1) take money from the open money market, 2) purchase a building from the building market and either place it in his Alhambra or reserve, or 3) engage in construction and re-construction projects with buildings that have been placed in the player's Alhambra or reserve. The game rewards efficiency, as when a player purchases a building from the market for the exact amount of money, the player may take another turn.

Players with the most buildings in each of the six building types in his Alhambra score in each of the scoring phases, and points are awarded for players' longest external "wall" section within their complex. The game ends when the building market can no longer be replenished from the building tile supply, and there is a final scoring, whereupon the player with the highest score wins.

Primary Subject
Games, Puzzles & Toys
Grade Start
3
Grade End
AD
EAN
4010350603734
Format
Other
Brand Name
Queen Games
Weight
0.0 (lbs.)
Powered by TurnTo
Questions that need answers | My Posts
Start typing your question and we'll check if it was already asked and answered. Learn More
Do not include HTML, links, references to other stores, pricing or contact info.
My question is about: 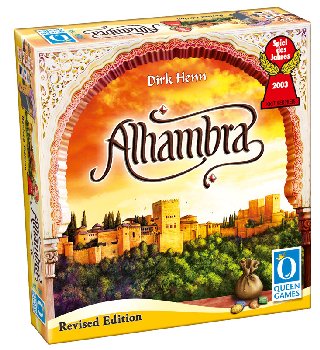