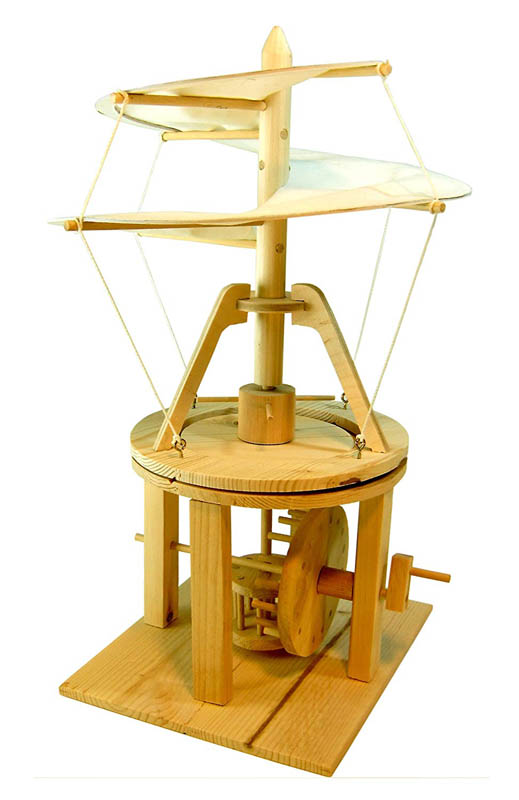 9 x 9 x 14. Like the original, this model does not fly, but it does illustrate the many advanced design concepts which da Vinci used in his attempt to defy gravity.

While it is clear this helicopter-style flying machine didnt work, it has sparked the imagination of many generations as one of his iconic inventions.

It really didnt work like a helicopter, as his premise was that air, like water, was a fluid, and that one could drill into it since it had mass. If air was as thick as water then it might have worked! Not sure why he didnt try this underwater. Something about breathing underwater I guess (but he did have drawings for a submersible breathing apparatus!)

Helicopters actually work on the principle of lift (the flow of air over an airfoil shape giving the lift) which this clearly did not.

Of course the aerial screw wouldnt work since as soon as it lifted off the ground (which was unlikely anyway since it would have weighed way too much), the people turning it would have nothing to push against, and so they would all be spinning in the same direction, so the driving force would stop. But it is fun to dream! There is a great essay written by Dylan Connelly that discusses this machine. His article is a download, so if you do an internet search it will download (there is no web site) A Study of Leonardo da Vincis Inventions: The Aerial Screw.

Our model now available, spins like we think Leonardo wanted it to, and uses one of his worm gear designs to accelerate the canopy to a pretty fast speed. We made a 2 to 1 gear, so one turn of the handle will make the canopy spin two times - yikes! Get out your Renaissance Lego people and put them to work!