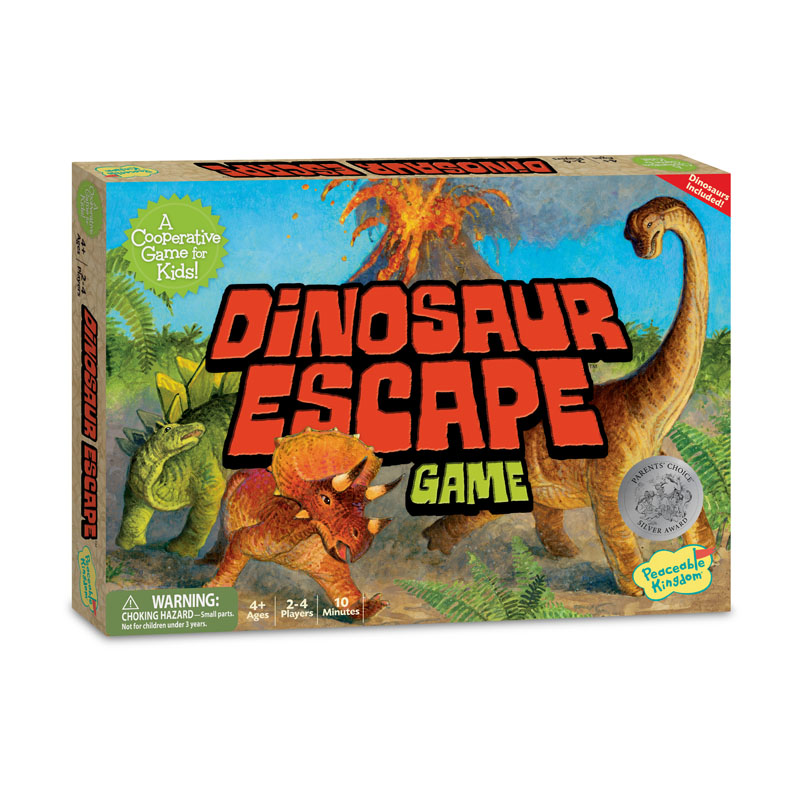 A disastrous volcano is threatening to erupt on the dinosaurs' homeland. Work together to get the dinos to safety before it does! The game begins with 12 fern tokens face down in three different terrain areas. There are three desert areas as well, where no tokens are placed. Three dinosaurs on the mainland are in need of rescue, and players collectively try to get them to Dinosaur Island. To give a dinosaur asylum, a fern token matching a dinosaur must be flipped over when the dino is walking through the habitat the token is in. A die is rolled each turn. If a volcano is rolled be-ware! You must add a piece to the volcano. When all five pieces have been added, it's gonna blow! If a number is rolled, a dinosaur piece may be moved that number of spaces in either direction on the board. Then a player flips over a token of their choice. If the token does not match a dinosaur currently walking through the token's terrain, it is flipped back over. Try to remember what has been revealed and where, but watch out for the T-Rex token! If this token is revealed, dinosaurs are returned to their starting positions. Everyone shares game pieces, and any player can aid the player whose turn it is in remembering which tokens are where. This game fosters cooperation, memory, and basic counting. For 2-4 players. Game time: 10 minutes.

Dinosaur Escape a game where everyone plays together, no one is left out, and everyone has fun! Traditional games tend to have one winner and one (or many) losers! In a cooperative game, the players work as a team against a common obstacle, not against each other.

Powered by TurnTo
Review More Purchases | My Posts
5.0 / 5.0
1 Review
5 Stars
4 Stars
3 Stars
2 Stars
1 Star
1
0
0
0
0
Rated 5 out of 5
Save the T-Rex too!
My 4.5 and 3 year old boys love it! They've actually modified it because they didn't like that the T-Rex didn't make it off the island before the volcano erupts. We now have 4 dinosaur figurines since we've added a small T-Rex from our own collection and the dinosaurs all run back to their start spaces when the footprint token is revealed instead of running from the T-Rex. The rules are simple, but it's far more enjoyable to play repeatedly (for me also!) than Candy land or HiHo Cherry-o. The game doesn't last more than 15 min at the longest, even with 4 dinosaurs. Working together toward a common goal has also helped alleviate some of the competitive nature between the two of them.
April 5, 2019
Tiffany W
Purchased
over 2 years ago 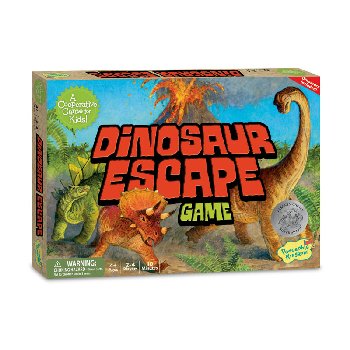