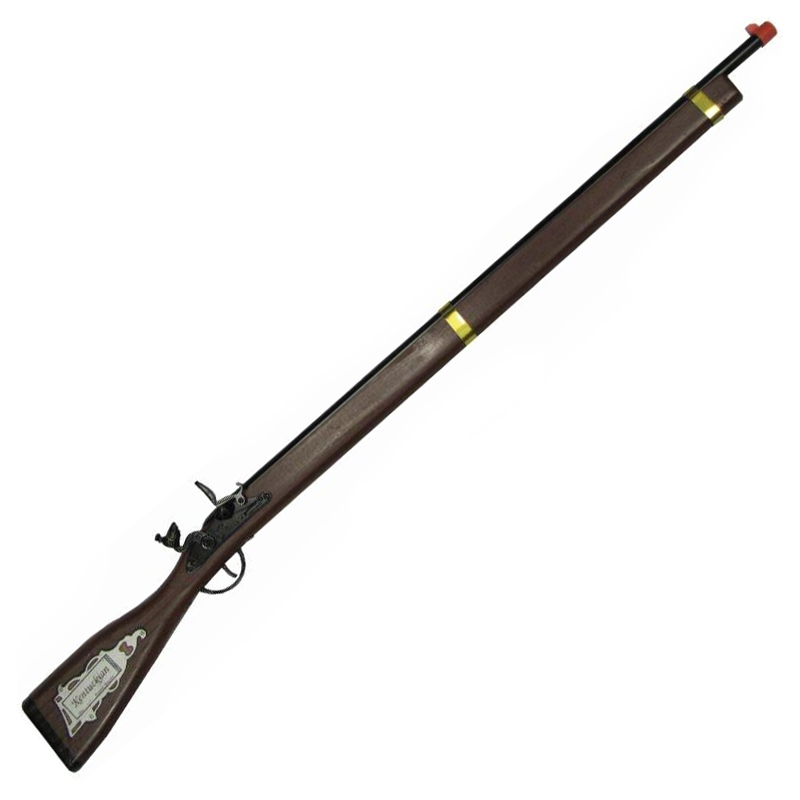 All Frontier rifles have been designed after the original rifles and muskets of their respective era. Each is constructed with a solid one-piece wood stock with metal & plastic parts.

Category Description for ACTIVE PLAY / OUTDOOR TOYS:
Primary Subject
Games, Puzzles & Toys
Grade Start
3
Grade End
AD
Note 1
Item only ships to contiguous US EXCEPT California. Will
Note 2
automatically cancel if ships to non-cont US or California.
EAN
047379173133
Format
Other
Brand Name
Parris Manufacturing
Weight
1.35 (lbs.)
Dimensions
4.25" x 37.25" x 1.75"
Powered by TurnTo
Questions that need answers | My Posts
Start typing your question and we'll check if it was already asked and answered. Learn More
Do not include HTML, links, references to other stores, pricing or contact info.
My question is about:

Powered by TurnTo
Review More Purchases | My Posts
4.8 / 5.0
17 Reviews
5 Stars
4 Stars
3 Stars
2 Stars
1 Star
15
1
1
0
0
great toy gun
its a very sturdy gun, i love how it can take caps or not. very well built and can withstand some light abuse that children will subject them to. this is the third time i ordered from you and i have nothing negative to say about these toy guns or your company
August 3, 2019
glyn t
Purchased
1 year ago
Loved It
We were delighted with the gun. My seven year old grandson had just viewed a video series on the U.S. Revolutionary War. He jumped up and down with joy when he opened his birthday present, the gun. He plays with it regularly.
June 23, 2018
Pat Davis
Purchased
over 2 years ago
Smiles for Christmas
This brought out the smiles on Christmas morning from both the kids and me. It is a very well made and the lock mechanism is great.
December 26, 2017
Summer H
Purchased
over 2 years ago
Great Replica
We purchased this for a Daniel Boone costume. It has turned really well and the Kentucky Flintlock Rife just added the right look.
October 27, 2017
Sandra P
Purchased
over 2 years ago
Great rifle for dress-up and pretend play
This rifle has been a huge hit in our house. Our 6-year-old, who loves to play dress-up and act out battles, etc. really loved that there was a mechanism to cock the rifle, and that it makes a clicking noise when the trigger is pulled (even if you aren't shooting any caps). It is definitely the coveted toy whenever friends come over to play. We've had a lot of fun reenacting the training, marching and battles of the Continental Army under General George Washington with this rifle as an essential accessory.
September 28, 2017
Sophia O
Purchased
over 2 years ago
I love the musket I love the pull off caps I think it's better than the real one
August 18, 2017
Blubber butt
Exactly what I was looking for.
My son wanted a flintlock rifle during our trip to Valley Forge National Park from their gift shop. As we were due to FLY back, I told him we couldn't get one and I would shop on-line to find one when we got home. Thanks Rainbow RC! this is exactly the rifle they had at the gift shop.
August 11, 2017
AJ C
Purchased
over 2 years ago
Very nice, and a great deal!
I purchased this for a historical "wax museum" at my child's school. Looked great with his costume, and was much cheaper than other sites. Would highly recommend!
June 11, 2017
Felicia R
Purchased
over 3 years ago
A big hit
My son loves it and thank you for the exemplary customer service.
February 3, 2017
Cliona C
Purchased
over 3 years ago
Hours of play
Our grandsons love their rifles and take them everywhere!
January 13, 2017
lori v
Purchased
over 3 years ago
Great replica!
The Rifles were very popular with my grandson and nephew. They played with them all day. Wood and metal, no plastic parts. They should last a lifetime and pass them down to their kids!
Got the wrong kind of caps. I wish someone had contacted me when filling the order to let me know.

Janet
January 3, 2017
Janet B
Purchased
over 3 years ago
would be 5 stars but flint lock broke 1 month of light play
My son collects guns and occasionally plays outside "shooting" them like they are real. On month after having received the gun as a Christmas gift, he pulls the trigger to shoot and the flint lock broke and fell to the ground. He was disappointed and if I hadn't been standing right beside him when it happened, I would have thought it was due to him being rough. Sadly, the metal just broke off?! He still loves the gun and plays with it.
February 6, 2016
Andrea S
Purchased
over 4 years ago
Great gun for the money
I bought this for a friend of our children. He loved this gun and has played with it for hours. If you purchase this item ,dont forget the caps that go with it for only a few bucks. Great toy for a kid.
January 21, 2016
Gustavson
Purchased
over 4 years ago
My son LOVES it.
He calls it his most prized position. We got some paper roll caps for it. That makes it even more exciting .
January 19, 2016
Anne H
Purchased
over 4 years ago
Great Toy Rifle!
My son loves this rifle...and believe me, you can't find a toy flint lock just anywhere. He's spent many hours "in battle" now with this rifle and it's still going strong. He even left a note on my desk one day as if he was writing home to tell his family that he was okay and describing the throws of battle and how he would be returning home safely soon. Great rifle to spur all this imagination! THANK YOU.
January 15, 2016
Jeff T
Purchased
over 4 years ago
6 year old grandson loves his Kentuckian. Caps shoot loud. Well made and ready for many bear hunts
January 4, 2016
Linda j G
Purchased
over 4 years ago
Great for a Revolutionary War costume
My son wanted to be a Revolutionary War soldier for Halloween, and this was the perfect accessory. The wooden stock and metal barrel make it substantial and realistic looking for a child's toy. We have not tried caps with it, but it looks like you can use ring caps (one at a time). Great purchase for what we needed.
November 22, 2015
Lisa S
Purchased
over 4 years ago 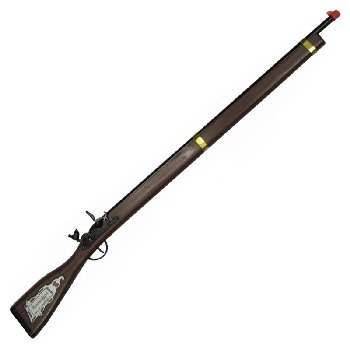