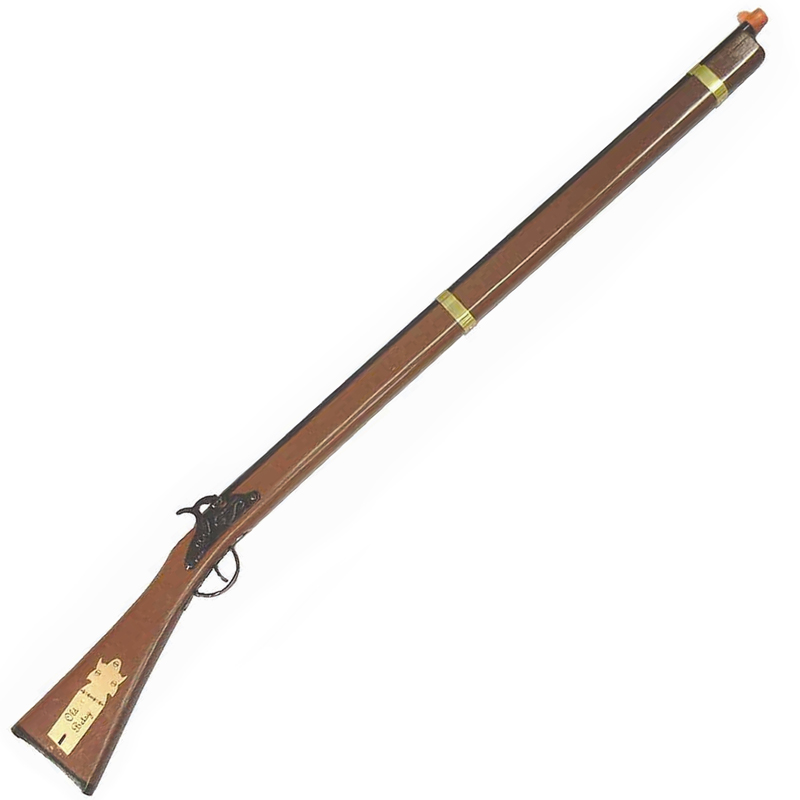 Crockett's Old Betsy is styled in Parris's Frontier collection. Made of Real Wood & Steel. Historical Collector Replicas designed & produced before 1898. All Frontier toy rifles have been designed after the original rifles and muskets of their respective era. Each is constructed with a solid one-piece wood stock with metal & plastic parts. Makes a Great Theatrical Prop. Features full orange tip as federally regulated.

All Frontier rifles have been designed after the original rifles and muskets of their respective era. Each is constructed with a solid one-piece wood stock with metal & plastic parts.

Category Description for ACTIVE PLAY / OUTDOOR TOYS:
Primary Subject
Games, Puzzles & Toys
Grade Start
K
Grade End
AD
Note 1
This item cannot be shipped to California. It will
Note 2
be automatically cancelled if shipping to California.
EAN
047379118363
Format
Other
Brand Name
Parris Manufacturing
Weight
1.15 (lbs.)
Dimensions
37.25" x 4.5" x 1.5"
Powered by TurnTo
Questions that need answers | My Posts
Start typing your question and we'll check if it was already asked and answered. Learn More
Do not include HTML, links, references to other stores, pricing or contact info.
My question is about:

Powered by TurnTo
Review More Purchases | My Posts
3.9 / 5.0
14 Reviews
5 Stars
4 Stars
3 Stars
2 Stars
1 Star
8
2
1
1
2
Rated 5 out of 5
Very happy with the purchase!!
Bought two of these guns for my son's. Very well built and definitely standing up to the rough play ! Worth the money for a well built product .
November 6, 2021
Maria F
Purchased
1 month ago
Rated 5 out of 5
We have a good understanding of how the settlers could defend themselves.
July 24, 2021
Michael G
Purchased
5 months ago
Rated 1 out of 5
Over all.
I was not pleased with this item. It was not strong enough to pop the caps. As the kids tried it got to where it would not cock at all.
April 8, 2021
Michael S
Purchased
8 months ago
Rated 2 out of 5
Broke within first three days son dropped it and it broke in half....
January 4, 2021
Tracy T
Purchased
11 months ago
Rated 4 out of 5
My Son Loves This
Love it, just know that if you give the kid caps, only do a little at a time. My son used too many on the first day and the heat wrecked the metal piece on the gun, so it won't work with caps anymore, but had we know we would have just done a few at a time and maybe the pin would still work. other than that, I'd give it 5 stars! He loves it either way!
December 11, 2020
Jennifer S
Purchased
1 year ago
Rated 3 out of 5
3 out of 5 for not working properly on arrival.
2nd time I've purchased this toy rifle. My middle son loves Disney's 1955 Davy Crockett movies. Great price, however the trigger and firing mechanism were not functional upon receiving the toy.
July 5, 2020
Rob B
Purchased
1 year ago
Response from Rainbow Resource Center
Please contact our Customer Service department by phone (888-841-3456) or email (info@rainbowresource.com. We are happy to correct a defective product situation.
July 7, 2020
Janice Staff
Rated 4 out of 5
Grandson Loves this.
He is a big Davy Crockett fan.The first one arrived damaged from shipping. When I called in a new order was immediately made and we received the the new rifle in just a few days.
January 19, 2019
Beverly B
Purchased
over 2 years ago
Rated 5 out of 5
Just like when I was little!
I got this for my son. He opened it this morning for Christmas and has been running around the house yelling IM DAVY CROCKETT. I remember doing the same thing when I was little! Great item got here fast too!
December 25, 2016
Clay C
Purchased
over 4 years ago
Rated 5 out of 5
Davy Crockett rifle great gift for young boy.
My nephew just turned 9 it is encouraging to see him adopt Davy Crockett as a hero having watched Walt Disney's Davy Crockett movie with Fess Parker. He was thrilled to receive the rifle with the Old Betsy plate inscribed & mounted on the stock.
We were able to find caps for the gun & it worked better than expected..It made our day to see him so excited with the gift.
July 27, 2016
Karen G
Purchased
over 5 years ago
Rated 5 out of 5
Grandson loves his rifle.
My 9 year old grandson is really into the revolutionary war era. He love the revolutionary rifle and pistol.
July 17, 2016
Jackies M
Purchased
over 5 years ago
Rated 5 out of 5
Grandson loves old Betsy. Well made and the caps shoot loud. Wonderful toy for great adventures in our 4 year olds back yard
January 4, 2016
Linda j G
Purchased
over 5 years ago
Rated 5 out of 5
Quick service. Product was as expected. Good value for the price.
January 4, 2016
Patrick M
Purchased
over 5 years ago
Rated 1 out of 5
POORLY MADE-NOT RECOMMENDED
I am giving this rifle one star because it is so realistic I would never give it to a child they lived in Texas!
December 29, 2015
Jeanie G
Purchased
over 5 years ago
Rated 5 out of 5
No one wants their homeschool to just be about the books Why not bring some fun in with this rifle? Well made heavy duty wood and metal these are built to last Whether you are studying frontiersmen or just looking for a well made toy for your collection this replica gun is sure to be the winner We bought 2 yesterday to save for our frontiersmen study but upon opening the box all 4 of my kids were clammoring to play with them From the 5 year old up to the 14 year old these were definite winners to our collection
April 16, 2013
Brandy Conlin 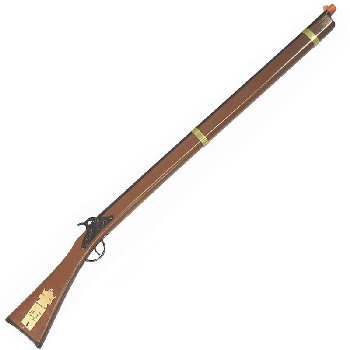