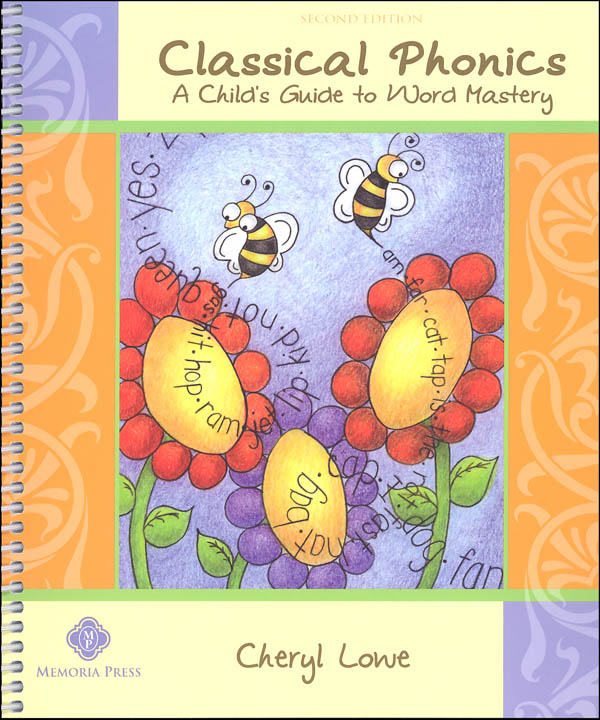 Classical Phonics is an integral part of the Memoria Press (i.e. Highlands Latin School) approach to reading. Both an underlying foundation to First Start Reading and a comprehensive "next step," this little book puts a complete series of phonics instruction in the hands of your child. Both the student and the teacher have the advantage of seeing the whole scope of phonics as well as each part in its relation to the whole. And it's all in one small, well-organized, attractive, concise book - a thorough update of a pint-sized, turn-of-the-(20th) century gem, Word Mastery, by Florence Akin.

Newly revised, the 2nd edition Classical Phonics offers even more teaching support with phonetic introductions for each unit written by Cheryl Lowe. Other revisions include updated word lists, reorganized content to align with the Traditional Spelling program from Memoria Press and fewer words per page.

Classical Phonics has been incorporated with the First Start Reading and Traditional Spelling programs. As each FSR workbook is completed (and put away), Classical Phonics provides word lists for continuing practice. With the recently developed Traditional Spelling, families who finish FSR and continue in the Memoria Press scope and sequence will find that all the page number references within Traditional Spelling align with the 2nd edition of Classical Phonics. An excellent compendium of all the phonics that a child learns in K-2, this handy little review book could be used with any phonics program. While it is not a complete language program (there are no sentences - only words - for reading and no printing practice), a resourceful teacher could add those elements.

Classical Phonics has eight units in four parts. Part One starts with the alphabet and CVC words, plurals, possessives, consonant teams (ck, ng, nk, ch, sh, th, wh), double consonants (Double f, l, s, z), consonant teams with silent letters (kn, wr, mb) and consonant blends including final and initial blends, and three letter blends. Part Two focuses on long-vowels and covers silent e words, long i & o, soft c and g, and the three sounds of y. Long vowel teams are then covered including oa, oe, ow, ee, ie, igh, y, ai, ay, ei, eigh, ey, ea, ey, and the three sounds of ea. Part Three covers special vowel sounds including the special sounds for oi, ou, oo, and o plus the r-controlled vowels. Part Four, Advanced Phonics, teaches advanced phonograms, suffixes and prefixes, spelling rules, syllables and variable endings. At the end of the book is a short but insightful section, Suggestions to Teachers, which carries the admonishment "do not put this book into the hands of your pupils until you have carefully studied these suggestions." Developed by the original author, this section presents a simple four-part plan for teaching phonics - ear training, tongue training, eye training, and word building. A summary of taught Phonics and Spelling Rules are listed along with the Most Common Words. Spiralbound 139 pgs, pb. ~ Janice/Deanne

Classical Phonics is a deceptively simple little book our teachers and families use constantly in both kindergarten and first grade. It consists of phonetically arranged word lists for students to practice their growing phonics skills. In a word list there are no context clues, so the learner must rely on his mastery of letter sounds.

For instance, if your child can pronounce each word in this list correctly—pot, pat, pit, put, pet—he knows his short vowel sounds, and you can move on to long vowels! If not, he needs more practice, and Classical Phonics is the most effective tool we know of to address the repetition that young ones need when learning to read.

Classical Phonics can be used as a supplement to any phonics program, and covers nearly all English phonograms and sounds taught through second grade. Classical Phonics is your handy tool for phonics practice and for building confident readers.

A surprise from a publisher known for its Latin programs! First Start Reading from Memoria Press is deceptively simple with an emphasis on vowel-consonant/word-families phonics and a serious focus on correct pencil grip and letter formation. Yes, in a day and age when penmanship is often ignored, they've chosen to make it a central part of their approach to reading. And, I have to confess it makes sense. After all, it serves as a kinesthetic reinforcement activity.

First Start Reading is a traditional and uncomplicated approach to phonics. After starting with ear training, vowel-consonant blending with unvoiced (m, n, s, r, f, t) consonants is first. Teach one sound for each phonogram at a time. Practice the new phonogram and its sound in a word family list with extensive practice in CVC words. Practice reading words and sentences as early as possible and reinforce learning with manuscript printing and that strong emphasis on correct pencil grip and letter formation. Include a small number of sight words. Throw in a couple of clever "tricks" for dealing with b-d confusion and you're done! Once mastered, these skills should take the student competently into a first grade reading level.

The entire program consists of four Student Worktexts (A-D) and a Teacher's Guide. The worktexts are about half letter presentation, blending, and reading practice and half writing practice space - on facing pages. Black and white line art drawings that can be colored keep the look clean. Letter formation clues include directional arrows on sample letters and starting point "dots." The four Student Worktexts are from 70 to 108 pages. The Teacher's Guide starts with an introduction that covers all the basics - syllabi for the Worktexts, the phonics approach, getting started, phonics recitation (an important element of the program), and pencil grip instruction. The rest of the book - except for a few reproducible visuals in the appendix - are wrap-around lesson plans. The lesson plans include general information for the teacher as well as scripted instructions for the student. As mentioned, half of every lesson is writing instruction, which serves as phonics reinforcement.

We expect easy-to-use from Memoria Press and we're not disappointed here. There's an amazing amount of quality phonics/reading instruction in a very reasonably priced package. You might be wondering what to do after this course. Perhaps Memoria will publish a sequel but until then they recommend Primary Phonics as a follow-up. First Start Reading is obviously designed as a lead-in to another new program from Memoria: StoryTime Treasures. Check our reading section for more information. ~ Janice

Category Description for Other Programs:

Programs in this section focus primarily on teaching children to read, and may not provide comprehensive instruction in reading comprehension, spelling, writing, or other language skills. Arranged roughly by grade. 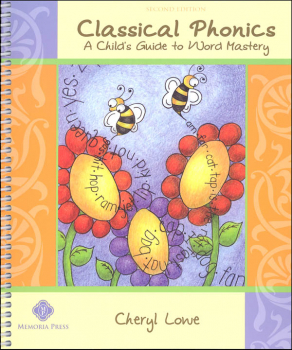