Earlybird Kindergarten Math Standards Edition Teacher's Guide B
BEST ANSWER: Here is the list of manipulatives for the EarlyBird Kindergarten workbooks. There is not a kit.

018733 Counting Discs
018741 Mathlink Cubes
018729 Bucket Balance
036023 Hexahedron Dice Set
018731 Student Geared Clock
010884 Tangrams (optional)
007935 Attribute Blocks (optional)
0
I have not needed many manipulatives at all. Maybe some counter bears for adding and subtracting, number cards for number recognition, unifix cubes may help too.
0
The manipulative list can be found on Singapore Math's website under Shop-Mathematics-Kindergarten-Manipulatives.
0
I have never used any manipulative S with this curriculum, and I have used it with three different children.
Vote for the best answer above!

Powered by TurnTo
Review More Purchases | My Posts
5.0 / 5.0
1 Review
5 Stars
4 Stars
3 Stars
2 Stars
1 Star
1
0
0
0
0
Rated 5 out of 5
My daughter and I love it!
I decided to purchase the activity book for part A since my daughter is already strong on the topics listed in the table of contents. We are going through this book fast as a review before using the textbook for part B. It is very fun. We enjoy the cut and paste activity pages, and my daughter loves the presentation. Each page is so colorful and just looks like fun to her. She is always happy when I get it out. Highly recommend.
November 19, 2018
amanda s
Purchased
over 2 years ago 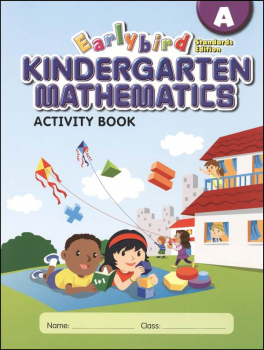