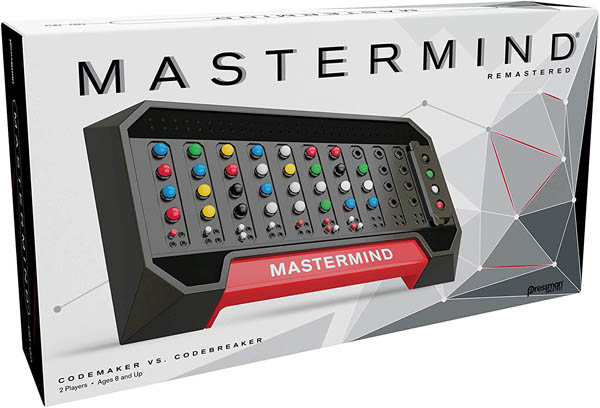 Test your code-cracking prowess with Mastermind, the challenging game of logic and deduction. Can you crack the code in 10 moves or less? Can you create a code that can’t be cracked? With more than 55 million units sold, Mastermind is a great strategy game…and one of the world’s most popular games ever. It’s easy to learn and fast to play and with thousands of code possibilities, it’s different every time. The Codemaker sets a secret code, then the Codebreaker tries to match the code using logic, deduction and maybe a little bit of luck. After each move, the Codemaker gives clues to the Codebreaker. Make the code even more devious by using multiple pegs of the same color or by leaving one or more peg holes empty. With so many possible code combinations, every game is guaranteed to be a brainteaser. All of these game components can be stored in the game board! The winner will be a true Mastermind! For 2 players, ages 8 and up.

Primary Subject
Logic
Grade Start
3
Grade End
AD
EAN
021853030181
Format
Other
Brand Name
Pressman Toy
Weight
0.85 (lbs.)
Dimensions
10.5" x 11.5" x 2.25"
Powered by TurnTo
Questions that need answers | My Posts
Start typing your question and we'll check if it was already asked and answered. Learn More
Do not include HTML, links, references to other stores, pricing or contact info.
My question is about:

Powered by TurnTo
Review More Purchases | My Posts
4.8 / 5.0
4 Reviews
5 Stars
4 Stars
3 Stars
2 Stars
1 Star
3
1
0
0
0
Rated 4 out of 5
Great game, poor construction
I would give this 5 stars for being a really fun two-person game, but unfortunately it is cheaply made and the pieces are very tiny and hard to manipulate. Once you get used to that, though, it's a great game for all ages, and there are so many ways to play it. Note to manufacturer: Please consider redesigning the set! Make the game board and pieces larger, and use heavier plastic or other durable material.
June 22, 2022
Carole T
Purchased
1 year ago
Rated 5 out of 5
My mom sent this game to my husband and I because it is a 2 player game. It takes a few rounds to get the hang of but it’s a lot of fun and never the same game twice. We really enjoy it. And the shipping was super quick too!
November 28, 2018
Brianna H
Purchased
over 4 years ago
Rated 5 out of 5
Mastermind was one of my most favorite games when I was growing up I actually bought a copy for my husband when we were dating long ago but somehow it got lost He said I had it in my apartment before we moved onto our farm ~ I say he had at his parent's home But regardless of all of that I recently bought it from Rainbow Resource for my daughter for Christmas because I knew my kids would just love it Turns out I was right about two things; one ~ my kids love this game and two ~ the game I bought my husband long ago is at his mom's house! Now the kids can play Mastermind at home and at Grandma's!
March 21, 2010
Angie Pfleiderer
Rated 5 out of 5
My favorite teacher taught our class to play Mastermind back in third grade and I had been looking for this game since I had children of my own old enough to play it To play the code-maker chooses 4 colored pegs and places them behind a hidden area The code-breaker tries to guess the code in as few guesses as possible using the feedback s/he receives from the codemaker It is great for promoting logical and deductive reasoning
January 9, 2009
Terri Knight 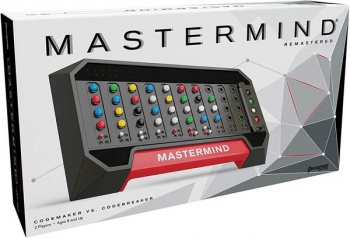