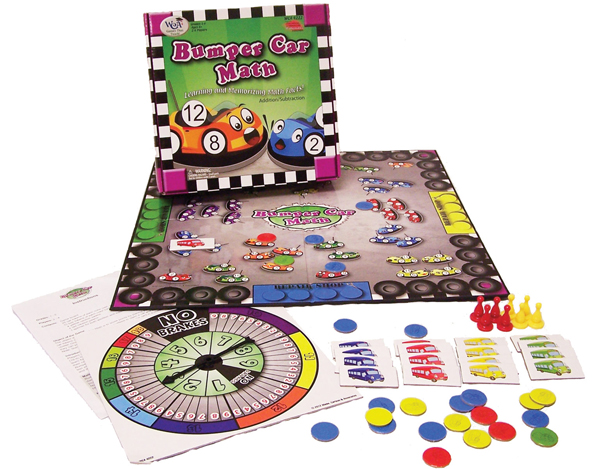 My favorite thing about this math game is that each bumper car holds a fact family, so children are seeing each whole and its parts together and strengthening those number bonds in their mind every time they play the game. The colorful board is set up like a bumper car arena with tires around the outside and the groups of bumper cars spread around the inside. Cars are grouped by the number of the sum/minuend (whole), and each group shares a common color. The whole appears at the top of the bumper car, with the addends/subtrahends (parts) on the wheels. Some groups may only have one car, such as the "2" group with only a car for 1 and 1, while other groups have up to five: the "10" group has cars for 4 and 6, 3 and 7, 2 and 8, 5 and 5, and 1 and 9. Fact families up to 18 are included. This game can be used to strengthen either addition or subtraction skills.

To practice addition facts, players spin the spinner twice, reading the addends from the inner section, and then place a token of their color on the bumper car featuring those two parts and their sum in the center. If the car already has another player's token on it, they bump it off and place it in that player's repair shop. If you manage to place tokens on all the bumper cars in a group, you replace your tokens with a school bus and control the group for the rest of the game. A "No brakes!" space on the spinner means you can put your token on the car of your choice that contains the other addend spun. The subtraction game follows the same rules except for you only spin the spinner once, this time using the outer two portions. The outmost section gives you the whole, while the middle portion will show you one part. Students have to solve the equation for the other part, and then place their token on the corresponding car. If two rounds go by with no player able to place a token, the game is over and points are awarded based on the number of cars controlled by each player's buses and tokens. Steph

Primary Subject
Mathematics
Grade Start
1
Grade End
6
ISBN
9781933745770
EAN
858700001717
Format
Board Game
Brand Name
Wiebe, Carlson and Associates
Weight
1.5 (lbs.)
Dimensions
8.75" x 8.75" x 2.5"
Powered by TurnTo
Questions that need answers | My Posts
Start typing your question and we'll check if it was already asked and answered. Learn More
Do not include HTML, links, references to other stores, pricing or contact info.
My question is about:

Powered by TurnTo
Review More Purchases | My Posts
5.0 / 5.0
1 Review
5 Stars
4 Stars
3 Stars
2 Stars
1 Star
1
0
0
0
0
Rated 5 out of 5
Great for reinforcing addition and subtraction
My nine and seven year old are using this game to reinforce their addition and subtraction skills, and they sure enjoy it!
September 18, 2020
Liz B
Purchased
over 2 years ago 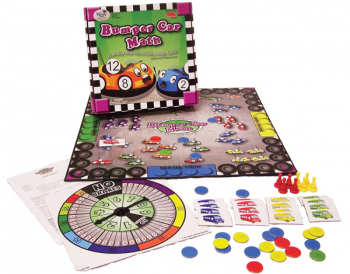