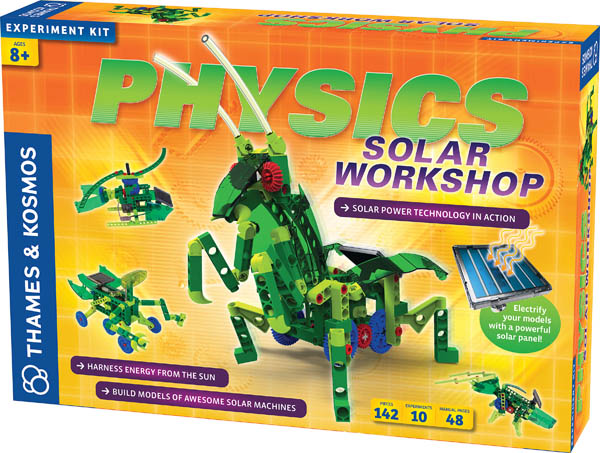 A fascinating kit based on the same idea as item # 34204 - see description (and from the same company) the best way to learn physics is through hands-on models that really do what you build them to do. The great part about all the models in this kit is that they run on solar power. The neat little solar panel attachment will power all five models when in sunlight or other direct high-powered lights. Models include rover, helicopter, robot, bug, and mantis. The 48-page, full-color experiment manual gives all the construction details for each model along with 10 experiments to do with harnessing and using solar power. The solar panel attachment point can also be powered by battery for times the solar panel will not work. ~ Zach

In one way or another, almost every form of energy we use originates as energy from the sun. Solar energy directly powers photovoltaic cells and thermal collectors. Indirectly, we get power from plants grown by the sun, oceans heated by the sun, and Earth's weather systems sustained by the sun. Even the energy stored in fossil fuels originated as energy from the sun, captured by plants and animals millions of years ago. Physics Solar Workshop explores the topic of solar energy, focusing on photovoltaic cells.

By building five awesome models and conducting experiments with them, you will learn how solar cells transform light into electrical energy, and how motors and mechanical devices can optimize the work done by this energy. Start with a simple helicopter model that converts sunlight into a rotating motion and demonstrates the basics of solar technology. Continue your experiments by constructing increasingly complex models: a solar-bot, a moon rover, and a stag beetle. Finally, build a cool praying mantis model that moves like an insect and is powered by a solar cell. The models can also be powered by a battery, allowing operation in all lighting conditions.

There are 138 parts, which are compatible with other Thames & Kosmos physics and engineering kits. The 48-page book offers illustrated step-by-step instructions for the projects. 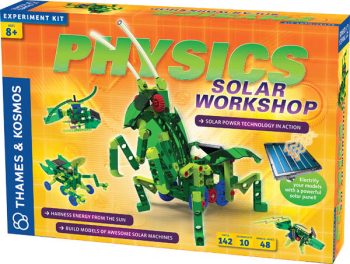