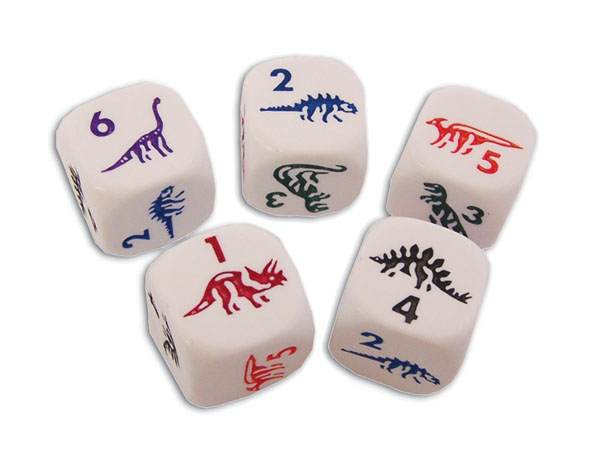 In this fast-paced dice game, players race to establish herds of dinosaurs before the T-rexes come! The game consists of five dice, each featuring five numbered herbivores (valued at 1, 2, 4, 5, and 6) and one T-rex (numbered at 3, but with no real value) on their faces. On each player's turn, they get up to three rolls to establish herds. Herds can be any group of two or more of the same dinosaur. On each roll, players can set aside matching dinosaurs to start herds, but watch out! For every T-rex rolled, an herbivore must be taken out of play for the rest of that player's turn. That can take quite a toll on your population! When the player has rolled three times and has a herd, they score bonus points according to the number of dinosaurs in the herd and their face value. Easy to learn and inexpensive, it's a great way for kids to hone their math skills! An unlimited number of people can play - depending on how long you want the game to take!

Primary Subject
Mathematics
Grade Start
K
Grade End
AD
EAN
018183015070
Format
Other
Brand Name
Koplow Games
Weight
0.05 (lbs.)
Dimensions
4.0" x 1.0" x 1.0"
Powered by TurnTo
Questions that need answers | My Posts
Start typing your question and we'll check if it was already asked and answered. Learn More
Do not include HTML, links, references to other stores, pricing or contact info.
My question is about:

Powered by TurnTo
Review More Purchases | My Posts
5.0 / 5.0
2 Reviews
5 Stars
4 Stars
3 Stars
2 Stars
1 Star
2
0
0
0
0
My kids absolutely love this game! It's a great take-along when you're traveling as it is small They love creating herds and scream when the T-Rex comes to gobble up some of their dinos They have fun while enhancing their math skills in the process
September 25, 2009
Suzanne Woodburn
The night we wrapped packages for Christmas Day my husband and I tried this one out So simple yet addictive We kept trying to roll one more herd without being eaten by the T-Rex We are looking forward to sharing it with our children It is sure to enthusiastically reinforce their math skills
December 26, 2008
Faith Lewis