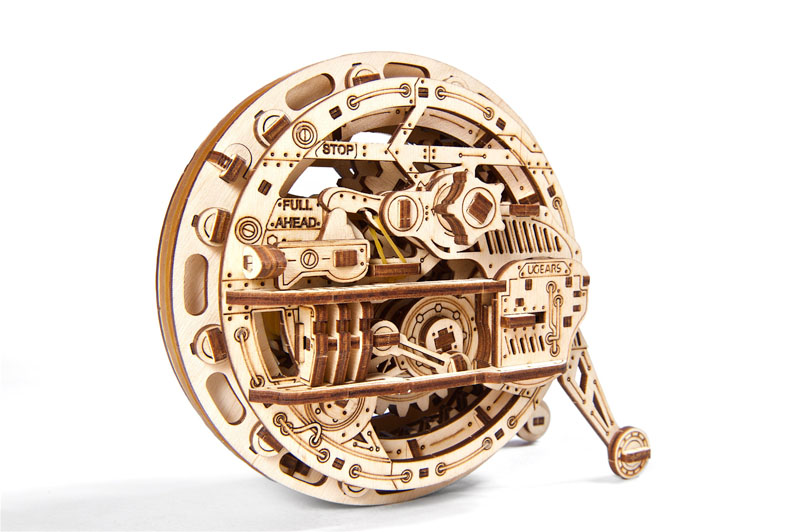 If you admire the creativity and ingenuity of early 20th century transportation prototypes, the UGears Monowheel kit will make a great addition to your model collection. Based on early designs that were either unmanned or that accommodated single driver-passengers, this all-wood model reflects the intricate working designs of the originals. You can proudly show off this model to your family and friends and impress them with your knowledge of bygone modes of transportation. You may even inspire them to build one of their own.

Monowheel vehicles were invented in the late 19th century, and though they proved too cumbersome for everyday transportation, they still captured the imaginations of inventors, engineers, and mechanics. Some were operated by a person sitting inside the wheel, while others were controlled by someone outside the vehicle or by a motor. All of them incorporated a moving exterior element and stationary interior component. One early prototype was an armored model intended for military use. That monowheel had an external shell to protect the inner workings from battlefield hazards and ran without a human driver.

You can still find monowheels today, but they are mostly used for entertainment and carry with them some safety concerns. For those who would rather not risk the lateral instability, or the terrifyingly named “gerbiling” effect, this miniature model is an excellent alternative. This monowheel was inspired in part by the military model and the driver-passenger prototype. In creating it, we stripped away the outer armor to let you observe the gears in motion. The exposed interior lets you easily control the rubber band motor and replace the bands and other parts as needed.

The completed model looks great on any collector’s shelf, but it does not have to stay there. The durable design allows it to roll over semi-hard and hard surfaces, meaning you can enjoy this model indoors and outdoors. It has two working modes that allow you to see the monowheel in action. One mode leaves the feet unlocked, letting the monowheel travel up to 5 meters or until it encounters an obstacle. The other mode keeps the feet locked, letting it roll up to 2 meters before turning and stopping.

The UGears Monowheel kit is an exciting and challenging model to assemble, with 300 laser-cut wooden parts. We have thoughtfully included 19 spare parts in case something gets lost or breaks. The pieces come still attached to the plywood and need to be carefully removed before assembly. Full-color instructions in 11 languages (English, Japanese, German, Spanish, Russian, Polish, Chinese, Korean, Ukrainian, Italian, and French) will help both experienced and novice hobbyists complete this project successfully. You do not need any special tools or adhesive to assemble this model. Simply remove the pieces, follow the instructions, and you are ready to roll.

Fully-functional mechanical models from nothing but laser-cut plywood? It sounds sketchy, and perhaps even fragile, but there's nothing amateur about these high-quality kits. Each box contains several sturdy wooden sheets of laser-cut pieces, with each piece numbered according to its chronological use in the instruction booklet. The booklet itself is the veritable pice de resistance of the kits, utilizing full-color 3D illustrations, "magnified" steps for small pieces, a straightforward labeling system, and helpful symbols for tricky steps. Once completed, the scale model operates just like the real thing, mimicking behavior as closely as 1/8th-inch plywood (and a few extra bits) can. Safes have combination locks, engines push pistons, and vehicles feature functioning transmission and rubber-band powered motors. All components are natural and sustainably-sourced. Oh, and did we mention the holy grail of model construction? No glue required.

The kits provide a range of complexity (between 1-12 hours), with 14 being the youngest recommended age for completing all models solo. With limited adult supervision or model-making experience, most kits can be completed by those as young as 11 or 12 and are durable enough for extended use. All models are beautifully designed and just about the right size for pretend play, and they can even be painted using watercolors or other thin paints! And of course, at the forefront of each and every lovingly crafted kit is a dedication to mechanics: you're not just putting it together; you're learning how it functions.

Primary Subject
Games, Puzzles & Toys
Grade Start
9
Grade End
AD
EAN
4820184120990
Format
Other
Brand Name
UGears
Weight
1.55 (lbs.)
Dimensions
6.75" x 14.88" x 1.25"
Powered by TurnTo
Questions that need answers | My Posts
Start typing your question and we'll check if it was already asked and answered. Learn More
Do not include HTML, links, references to other stores, pricing or contact info.
My question is about: 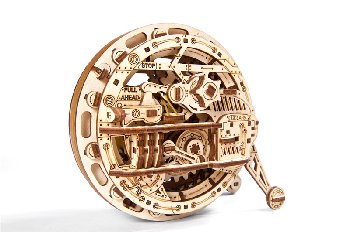