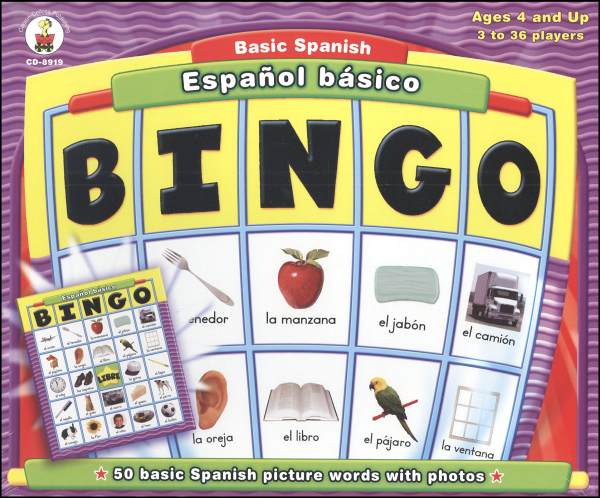 The game of bingo is adored by young and old alike, and this game combines the fun of bingo with a great learning experience. The game contains 36 bingo game cards, 50 calling cards, an answer mat, and square cardboard bingo chips. Each game card consists of the traditional B-I-N-G-O letters at the top of the card, with 25 squares beneath. Each square contains a colorful picture of some kind of object, with a Spanish label given directly beneath the picture. The game is played like traditional bingo, with a caller drawing calling cards and then reading the letter and object given on the card. For example, the caller reads, "B, la manzana," and players look for la manzana (an apple) in their "B" column. The first player to cover five squares in a row wins the game. A large answer mat is included for the caller to mark which objects have been called. Fifty basic Spanish words are covered including objects, animals, body parts, and more. The game is for 3-36 players, so it's perfect for any group. - Rachel

Powered by TurnTo
Review More Purchases | My Posts
5.0 / 5.0
1 Review
5 Stars
4 Stars
3 Stars
2 Stars
1 Star
1
0
0
0
0
Rated 5 out of 5
Spanish Bingo Game
We enjoyed playing this on our recent trip to Mexico. My husband and I played the game for over an hour with 5 youngsters ranging from 7 to 12. The two oldest ones were taking Spanish so many words were familiar; the younger ones were able to play using the photos. All of us added some useful/commonly used Spanish words to our vocabulary and had a great time doing it!
January 15, 2018
Constance L
Purchased
over 3 years ago 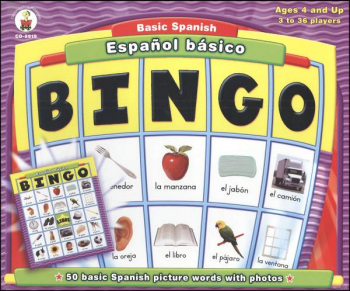