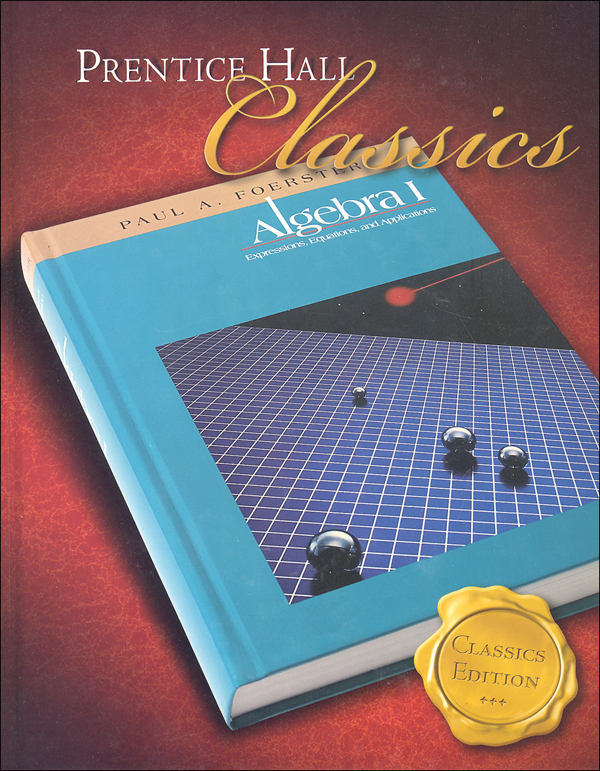 This text is a one year, high-school algebra course that the author used in his own classroom. The first part of the book leads up to the Quadratic Formula by mid-year; this is a break from a more traditional sequence. As a result, students are able to work more realistic word problems using decimals. The second part of the book covers expressions with two variables, harder factoring problems, algebraic fractions, radical equations, and inequalities. This book is in its third edition and now includes a chapter on probability, scattered date, and linear functions, which wasn't included in the previous edition. Chapters, in order, are: expressions and equations, operations with negative numbers, distributing: axioms and other properties, harder equations, some operations with polynomials and radicals, quadratic equations, expressions and equations containing two variables, linear functions/scattered data/probability, properties and exponents, more operations with polynomials, rational algebraic expressions, radical algebraic expressions, inequalities, functions, and advanced topics. Each chapter begins with an introduction to the topic, a visual example, an objective for that section, and exercises. Some chapters include oral practice, but all examples are shown in a step-by-step fashion for thorough understanding. The chapter wraps up with a chapter review and test, and a final review and examination rounds out the text. The back of the book includes reference materials such as a table of square roots, table of trigonometric functions, glossary, answers to selected problems, indices, and a skills handbook. The skills handbook is a reference section for basic skills such as problem solving strategies, the four basic functions, fractions/decimals/percents, line and circle graphs, and spreadsheets.

The Solutions Manual contains all worked out problems, step-by-step, for the exercise sets, oral practice sets, chapter reviews, chapter tests, and the final review and examination that are found in the student text.

Paul Foerster is a name synonymous with math. He has not only taught math, he has a degree in chemical engineering and a Masters in mathematics along with the honor of the Presidential Award for Excellence in Mathematics Teaching. He has written the successful Algebra 2 and Trigonometry course that is to be used following Harold Jacobs Elementary Algebra and Geometry: Seeing, Doing, Understanding. Paul Foerster has also written his own Algebra 1, which is the same great quality as his other math courses.

Algebra I - Solutions Manual
0
BEST ANSWER: There is not a workbook that I know of. I bought my son a spiral-bound notebook of quad ruled paper (graph paper). In the notebook, he worked out the problems and wrote the answer. This is how a traditional high school or college math textbook is used. If your child has not done this before, you may want to show them how to have neat pages. For example, write each problem number along the left margin, leave a space (a blank line) between each problem, circle or underline the answer to make it stand out from the work. And title each new exercise or section.
You will want to buy the Solutions Manual to have all the answers.
If you want something that will function like a teacher for this curriculum, I recommend adding to this David Chandler's Math Without Borders.

https://www.rainbowresource.com/proddtl?id=033404&subject=Mathematics/10&category=Foerster+Algebra+1/11487
0
BEST ANSWER: This Classics edition was published in 2006. However, it is a reprint of an older publication with copyrights in the 80s and 90s.

https://www.rainbowresource.com/proddtl?id=033404&subject=Mathematics/10&category=Foerster+Algebra+1/11487
0
BEST ANSWER: In the Solutions Manual. The Solutions Manual contains all worked out problems, step-by-step, for the exercise sets, oral practice sets, chapter reviews, chapter tests, and the final review and examination that are found in the student text.

https://www.rainbowresource.com/proddtl?id=033404&subject=Mathematics/10&category=Foerster+Algebra+1/11487
Vote for the best answer above!

Powered by TurnTo
Review More Purchases | My Posts
5.0 / 5.0
5 Reviews
5 Stars
4 Stars
3 Stars
2 Stars
1 Star
5
0
0
0
0
Rated 5 out of 5
Great book!
I have always loved the way this book is laid out. It is straight forward and logical. Bummed I can't get a solutions manual any more but love this book.
July 26, 2021
Christina C
Purchased
1 year ago
Rated 5 out of 5
Algebra 1 EASE
Prentice Hall Algebra 1 by Paul A. Forester is designed to make Algebra 1 understandable and not so overwhelming! My daughter was frustrated and gave up in despair with Saxton Math Algebra 1, even with their Teacher's DVDs! So I switched her to this math book (I also bought the solutions book) and she took off like a shot! No more drama and dragging her feet to get daily math done! She "gets it" and is no longer frustrated & over-taxed. The formatting, examples, and practice problems in this Algebra 1 book just work for her. There are less practice problems than Saxton, the problem set is about the same amount as Saxton, but with this book, the format and the examples seem to just "work" or "click" for my daughter. It's even a cheaper purchase than Saxton! She asked me to "hurry and get this same author's Geometry and Algebra 2" if there are any. My daughter now does math without needing pressed or nagged, and doesn't need as much guidance. Like I said, the lay out of Forester's practice sets and presentation of new concepts in this book is laid out in a manner that appeals to my daughter and she readily understands. Her scores are now never below 95 - all because of the formatting, presentation of concepts, and less problems. Hey, if the course works and the student is now happy, why go back to Saxton? Thanks Rainbow for reasonable prices and posting good description of materials - it made this purchase a perfect fit.
September 24, 2020
Rena H
Purchased
over 2 years ago
Rated 5 out of 5
Great company
My kids go to a school that requires me to buy their textbooks. I needed a textbook that was hard to get. Rainbow had the book at a lower price than competitors and provided timely delivery. I'll certainly be buying from this company again.
September 23, 2020
David L
Purchased
over 2 years ago
Rated 5 out of 5
Great
Best Algebra book on the market.
December 7, 2018
User
Purchased
over 3 years ago
Rated 5 out of 5
Excellent book to begin Algebra I
This is my first year to homeschool and this book has made teaching my eighth grader Algebra I much less intimidating. Each chapter is broken down into sections which build on each other with ample practice and problems to master each chapter. I purchased the The Algebra I Solutions Handbook and the Home Study Companion Flash Drive as well and am very pleased.
November 16, 2017
Kim S
Purchased
over 5 years ago 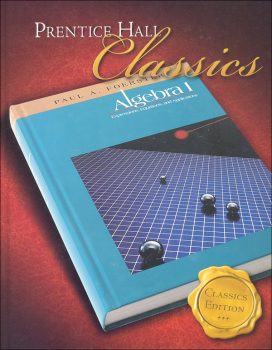