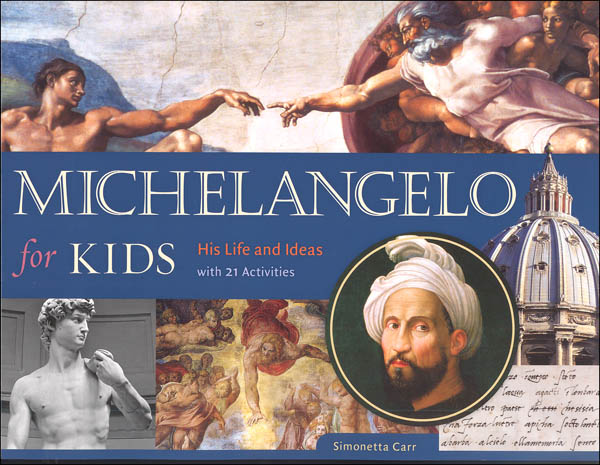 Michelangelo for Kids: His Life and Ideas, with 21 Activities

Michelangeo was so gifted: whether in sculpture, painting, poetry, architecture, even war construction! Crazy talented! He lived a long life for the time, given his strenuous profession but his behavior was". Well, I wouldn't want to spoil the story for you, but he was a bit of a " you'll see. You'll learn so much here about his childhood, family, his assistants, his role in local politics, his competition with DaVinci, the various projects he took on and why and those left unfinished, etc. Some interesting regional Italian history is included as well. Beautiful color photos show both his famous and less familiar works. Scattered through the book are some activities to try. They mildly represent some artistic methods, but I would not get this book for the activities alone. This would make a great addition to an art or history unit study. In the back are some helpful resources including a glossary and review of the various people mentioned in the book. 130 pp, sc. ~ Sara

Michelangelo Buonarroti - known simply as Michelangelo - has been called the greatest artist who has ever lived. His impressive masterpieces astonished his contemporaries and remain some of today's most famous artworks. Young readers will come to know Michelangelo the man as well as the artistic giant, following his life from his childhood in rural Italy to his emergence as a rather egotistical teenager to a humble and caring old man. They'll learn that he did exhausting, back-breaking labor to create his art yet worked well, even with humor, with others in the stone quarry and in his workshop. Michelangelo for Kids offers an in-depth look at his life, ideas, and accomplishments, while providing a fascinating view of the Italian Renaissance and how it shaped and affected his work. Budding artists will come to appreciate Michelangelo's techniques and understand exactly what made his work so great. Twenty-one creative, fun, hands-on activities illuminate Michelangelo's various artistic mediums as well as the era in which he lived. Kids can: make homemade paint, learn the cross-hatching technique used by Michelangelo, make an antique statue, build a model fortification, compose a Renaissance-style poem, and much more. 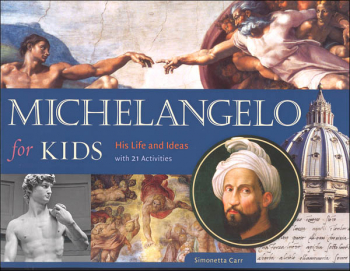