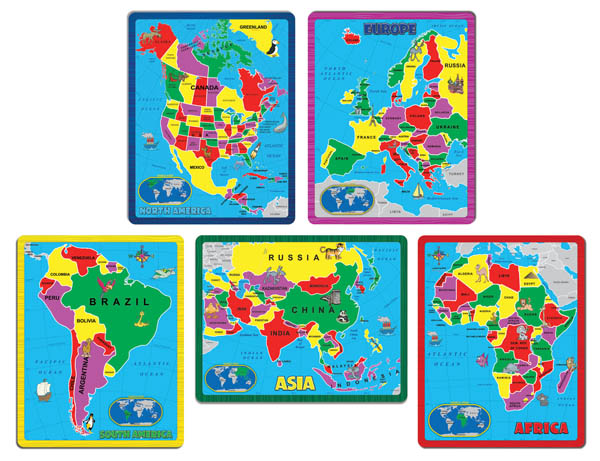 Learn about the continents in countries as you complete these colorful jigsaw puzzles.  These puzzles are actually parts of the popular Global Puzzle (by the same manufacturer) only in individual continent puzzles.  An attempt is made to make every country and state its own piece; however, with some of the smaller countries and states, they sometimes have to be joined together.  Capitals of each state and country are shown by a star, and some of the major cities in countries are also shown.  Each puzzle is approximately 15" x 12" and contains information about the countries (such as capital, population, and land area) on the back. ~ Megan

Primary Subject
History/Geography
Grade Start
PK
Grade End
4
EAN
851941000693
Format
Other
Brand Name
A Broader View
Weight
3.6 (lbs.)
Dimensions
15.25" x 12.0" x 0.88"
Powered by TurnTo
Questions that need answers | My Posts
Start typing your question and we'll check if it was already asked and answered. Learn More
Do not include HTML, links, references to other stores, pricing or contact info.
My question is about:

Powered by TurnTo
Review More Purchases | My Posts
4.5 / 5.0
6 Reviews
5 Stars
4 Stars
3 Stars
2 Stars
1 Star
4
1
1
0
0
Rated 5 out of 5
Our grandson lives these puzzles. But it made him sad when there was no Australia puzzle. Hopefully this will be added in the future. The puzzles are good quality.
April 14, 2021
David B
Purchased
1 month ago
Rated 3 out of 5
Good, but not what I'd hoped for.
Decent construction, but I wish the pieces lined up more with the individual countries. I was hoping to use it in a Montessori way so my kids could put the puzzle together, as well as trace and paint the individual countries to make their own maps.
September 16, 2020
Susan L
Purchased
8 months ago
Rated 5 out of 5
Great puzzles for learning.
January 6, 2019
Nyssa P
Purchased
over 4 years ago
Rated 5 out of 5
Great supplemental resource!
My kids love occupying their fidgety fingers with these puzzles as they listen to their read-alouds. I love that it helps cement the geography that I have always struggled with in their minds. Win/win!
October 19, 2017
User
Purchased
over 3 years ago
Rated 4 out of 5
Nice cardboard puzzles
My kids are enjoying these puzzles. Most countries are individual pieces but they dont have capitals.
September 12, 2017
Rachel M
Purchased
over 3 years ago
Rated 5 out of 5
Great puzzles...very colorful! My 4th and 5th grader have been learning the countries of Africa and these have been helpful!
March 12, 2016
Cynthia B
Purchased
over 5 years ago 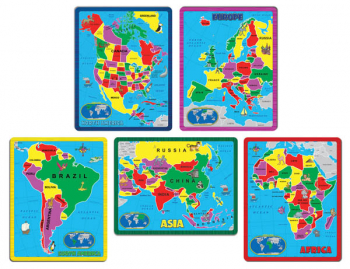