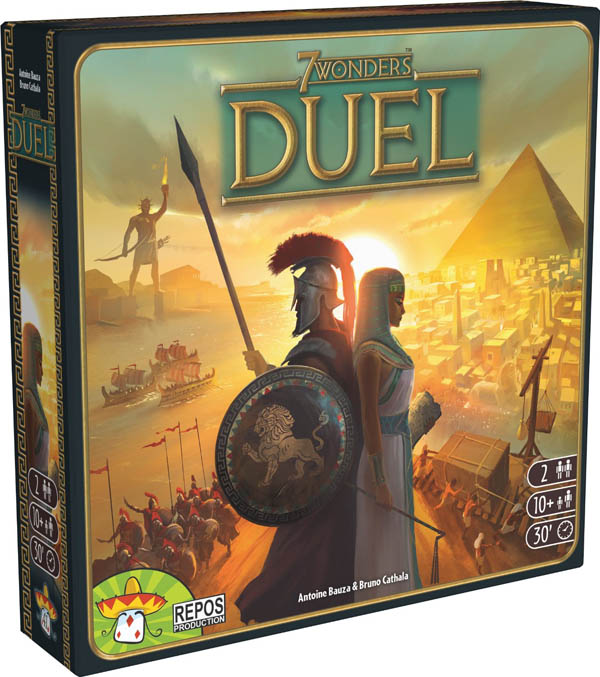 Similar in concept to the original 7 Wonders game, but redesigned for 2-player competition. As in the original, each player is leading a civilization and constructing Cities of Buildings and Wonders over the time span of 3 Ages.During each Age, each player can play 10 cards to earn coins, strengthen their armies, and make scientific discoveries, all in the name of developing their city. Unlike the original, the game can end at any time if a player can claim military or scientific supremacy. Do you go for the quick victory or gradual domination? A full-length game takes about 30 minutes. ~ Bob

Experience an intense two-player struggle for supremacy in the ancient world! Designed by Antoine Bauza and Bruno Cathala, 7 Wonders: Duel adapts the game play and excitement of 7 Wonders for one-on-one battles. Choose the Wonders you aim to build and guide your city through three Ages of drafting cards from cunningly shaped tableaus. Victory can be achieved in three ways: by invading your opponent's capital, by achieving a monopoly on scientific advancement, or simply by crafting the city that will earn the most victory points in the end. But be warned: only seven of the eight Wonders in play can be built. Will your city achieve greatness, or will your opponent prevent you from completing all your Wonders? 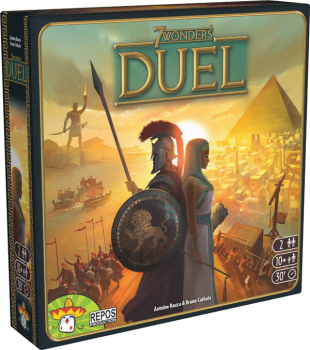