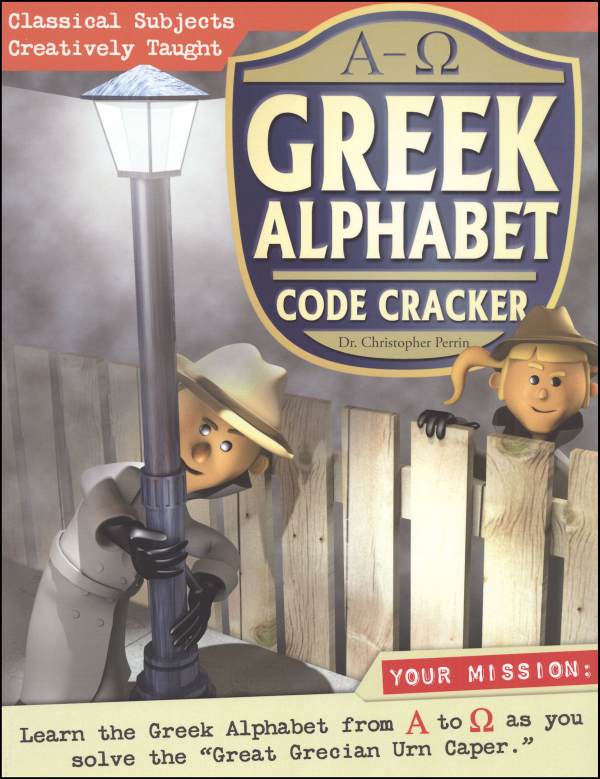 Greek often seems more intimidating than Latin because of its unique alphabet. Most of us only come across those funny little symbols in higher-level math and science! This ingenious book, however, equates learning the Greek alphabet to learning a top-secret code needed to solve a robbery case. A priceless ancient Greek urn has been stolen, and it's up to the reader to learn the Greek alphabet to decode clues from the eyewitnesses. There are eight units in the book, which are estimated to take eight weeks to complete if you study Greek 3-4 times per week. Of course, you could complete the book in less time or spend more time on it, depending on the ages and abilities of the students participating. Unit 1 introduces the Greek alphabet and a pronunciation guide. Units 2-5 each introduce six new letters in the Greek alphabet while reviewing previously learned ones. Units 6 and 7 cover consonant blends, vowels and diphthongs and Unit 8 is comprehensive review. The Greek letters are reinforced through a variety of exercises, including matching, solving simple "cyphers" that equate to English words, handwriting practice with the Greek letters, writing Greek words and saying them aloud, and word puzzles. The author also recommends beginning each session by singing the Greek Alphabet Song together, which can be downloaded from the publisher's website. Although the pages seem to be intended as consumables, they are full-color and not reproducible. Because of this, you will either need a book for each student, or have them write on a separate sheet of paper. Reference charts, extra writing practice sheets, code-making worksheets and a Greek Alphabet Code Cracker Cypher Wheel to assemble are found at the back of the book. Please note that answers are no longer located in the book, but you can download an answer key PDF as well as other extras for the book at www.classicalacademicpress.com/greekcode along with the alphabet song mentioned above. Whether you are looking to begin Greek for Children, or are just "testing the waters" to see if you are interested, you can't beat this introduction for the excitement of catching the thieves! - Jess

In Greek Alphabet Code Cracker, understanding the Greek alphabet is the key to decoding clues and recovering the stolen Urn of Achilles! Students will learn all of the Greek letters, from Alpha to Omega, along with their phonetic pronunciations. Students will practice writing the letters and, in the process, they will gather clues from witnesses and trace the path of the thief! This workbook text is an excellent introduction to Greek for students of all ages.

* 8 chapters, to be completed approximately 1 chapter per week, depending on student age

* Students will learn all of the consonant and vowels sounds, as well as the consonant blends and diphthongs (vowel blends or combinations), through systematic, phonetic lessons

Powered by TurnTo
Review More Purchases | My Posts
5.0 / 5.0
7 Reviews
5 Stars
4 Stars
3 Stars
2 Stars
1 Star
7
0
0
0
0
Rated 5 out of 5
Engaging!
The group I taught this too were pumped about learned Greek! They loved the mystery woven throughout the course!
July 26, 2021
Apryl P
Purchased
over 3 years ago
Rated 5 out of 5
This was a very fun way to learn the Greek alphabet before studying Greek officially. My daughter and I truly had a blast working on it! Be sure to watch the trailer to see the beginning of the story!
January 16, 2021
Jackie G
Purchased
over 2 years ago
Rated 5 out of 5
My 7-year-old loved this book. It teaches the Greek alphabet using English words, so there is not much actual Greek in here, but it is a fun introduction to the alphabet and sounds of the letters.
November 19, 2019
Jennifer
Purchased
over 3 years ago
Rated 5 out of 5
Super fun and educational!
I got this for my first grade son and he loves it! He worked really hard to finish the book in just a couple of weeks and he is excited to start Song School Greek next. This was a very fun, gentle introduction to the letters of the Greek Alphabet and the sounds they make. He loved solving the mystery and cracking the code!
April 20, 2018
Rosemary H
Purchased
over 4 years ago
Rated 5 out of 5
fun
What a fun way to introduce the Greek alphabet. It introduces each letter and its sound. Whether you plan to study Greek or not in the future, it is fun on its own. Or, it would be a fun practice for translating phonetic sounds of the Greek alphabet... and solve a little mystery in the process. I'm not sure about it taking 8 weeks, I think it is a bit too fun to make it take that long... but I'm just 'mom'... (my daughter is having fun with it though... once she got the hang of it) (We'll do 'real' Greek next year.)
January 13, 2016
April J
Purchased
over 7 years ago
Rated 5 out of 5
My 6 year old son loves this book so much he works from it everyday There is no preparation required except for the cypher wheel which is very easy to make There are some songs mentioned in the book that you have to listen to but they can be found on the internet (link in the book) or you can use the Song School Greek cd We're not even halway through the book but my son knows all the letters and their sounds We're looking forward to use Song School Greek after this
September 17, 2013
Helena M
Rated 5 out of 5
I purchased this book for my 2nd grader when a friend at church got him interested in learning Greek We have had fun using it and now that we are near the end he can easily identify and pronounce all of the letters of the Greek alphabetThere is tiny amount of prep-- you must make a color copy of the code cracker and use a brad to attach the two circlesNow I am looking for a book to take him to the next level using the letters to read real words
January 26, 2013
Christie T. 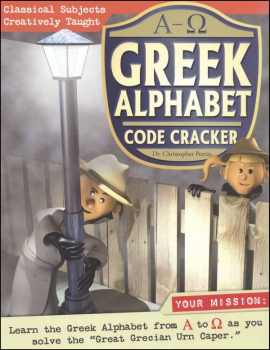