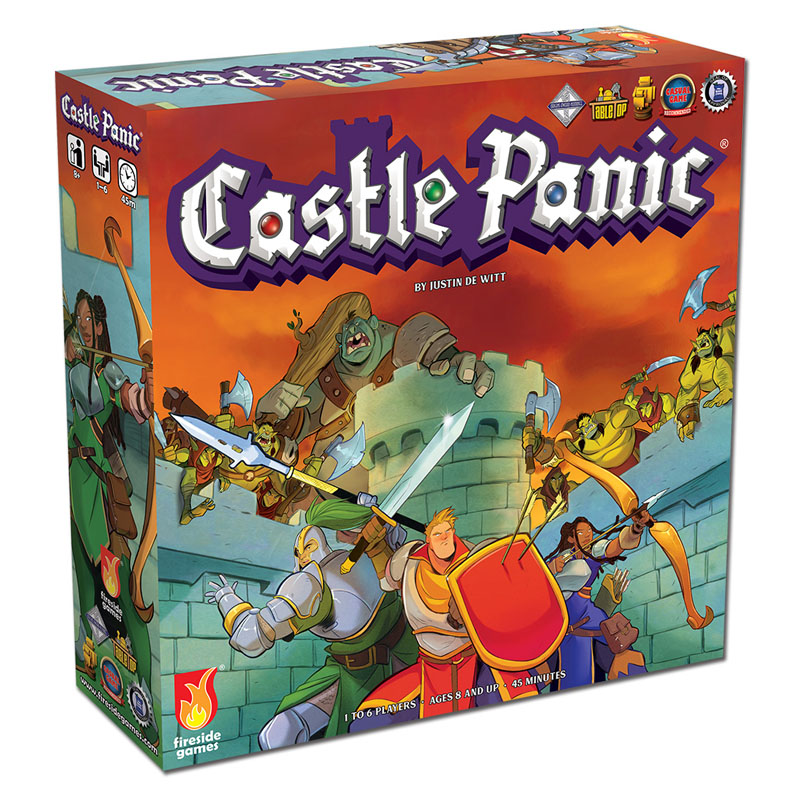 Goblins, orcs, and trolls are attacking the castle, and its up to you and your fellow generals to defend it! In the center of the board is a castle with six towers, bordered by six walls. Each wall faces a different 60-degree arc of the board, numbered 1-6 and colored either red, green, or blue. Surrounding the castle are four rings that determine distance from the castle, from closest to furthest: Swordsmen range, Knights range, Archer range, and Forest (which holds monsters and other baddies) range. Each player is dealt 4-6 cards (depending on the number of players). Each turn, players can discard, trade, and play cards. These cards allow players to draw additional cards, rebuild walls, or attack the monsters advancing on the castle. For example, if a goblin was in the green Archer range, a player could use a green archer card to attack it. At the end of each players turn, two things happen: all monsters advance towards the castle, destroying walls or towers if they are close enough, and two extra monster tiles are drawn and placed on the board. And when a special tile is drawn, like the Goblin King, a boulder, or the dreaded draw 4 more monster tiles, its time to panic! The goal is to make it through the entire deck of monsters without losing all of the castle towers.

Once you feel confident enough to fend off the hordes of enemies, you can try upping the difficulty with variantsincluding one that lets a single player become the dungeon overlord and control the monsters. A good amount of strategy and a whole lot of cooperation is key to ensuring your castles survival! The game is quite difficult at times (hence the name!), but can be enjoyed by anyone 8 and up. A perfect family/friends game for 1-6 players. ~ 60 minutes.

Castle Panic is a cooperative tower defense board game for 1 to 6 players. The co-op element makes Castle Panic a great family game, and the perfect kick-off for your weekly game night.

You must work together to defend your Castle, in the center of the board, from Monsters that attack out of the forest, at the edges of the board. Trade cards, hit and slay Monsters, and plan strategies together to keep your Castle towers intact.

Win or lose as a team, but only the player with the most victory points is declared the Master Slayer. Players must balance the survival of the group with their own desire to win.

Primary Subject
Games, Puzzles & Toys
Grade Start
5
Grade End
AD
EAN
850680002005
Format
Other
Brand Name
Fireside Games
Weight
0.0 (lbs.)
Powered by TurnTo
Questions that need answers | My Posts
Start typing your question and we'll check if it was already asked and answered. Learn More
Do not include HTML, links, references to other stores, pricing or contact info.
My question is about:

Powered by TurnTo
Review More Purchases | My Posts
5.0 / 5.0
2 Reviews
5 Stars
4 Stars
3 Stars
2 Stars
1 Star
2
0
0
0
0
Rated 5 out of 5
Even More Fun Than Anticipated!
My family enjoys this game immensely! My husband and I play it regularly with our 6&7 year old sons. The cooperative play makes it easier to include my 6 year old, and my 7 year old says to tell you he likes the "Master Slayer" element of the game! Even though it is a cooperative game, there is an element of friendly competition in that whoever slays the most monsters will be named the "Master Slayer."

And for the record, it is in fact possible to lose this game and have the monsters destroy the castle. We enjoyed the game much more after we had lost once. The first few times we played, we won and I became suspicious it was impossible to lose. My suspicions were unfounded!
July 13, 2021
Hansen H
Purchased
1 year ago
Rated 5 out of 5
This is a great game well liked by both my boys and girls. Even I enjoy it and will often choose it first when picking a game to play with the kids.
March 21, 2019
SARA
Purchased
over 4 years ago 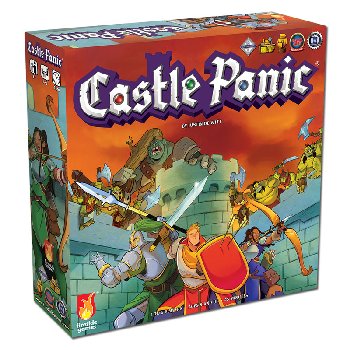