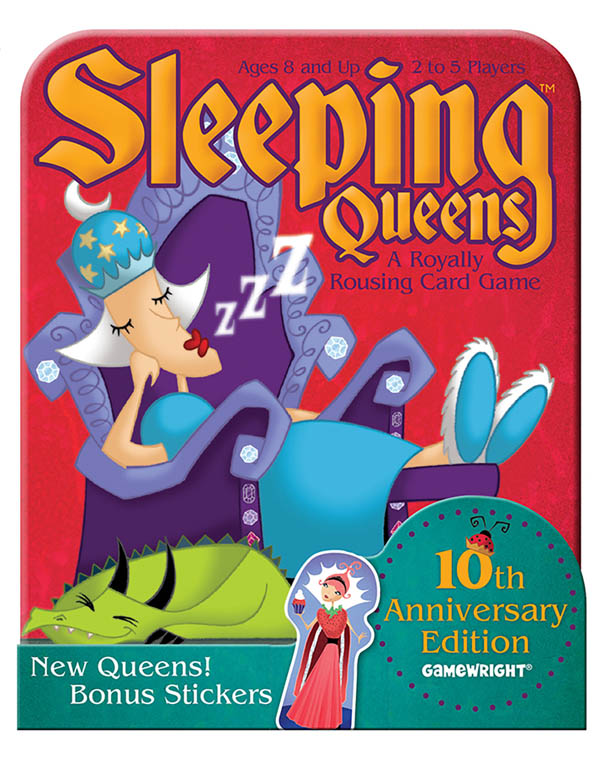 This special anniversary edition of the game includes new kings and queens as well as fun sticker sheets in a colorful, collectible tin. Contains 85 cards.

Rise and Shine! The Pancake Queen, the Ladybug Queen and ten of their closest friends have fallen under a sleeping spell and it's your job to wake them up. Use strategy, quick thinking and a little luck to rouse these napping nobles from their royal slumbers. Play a knight to steal a queen or take a chance on a juggling jester. But watch out for wicked potions and dastardly dragons! The player who wakes the most queens wins. Deluxe anniversary edition includes new queens and kings, plus sticker sheets, all in a collectible tin.

We're proud to introduce this deluxe anniversary version of Sleeping Queens, or as we've affectionately dubbed it, the "Strawberry Queen" edition. Why the Strawberry Queen? Well, the story goes that when we first produced Sleeping Queens we asked 8-year-old game inventor Miranda Evarts and family to brainstorm a long list of queens for us to choose from. We narrowed down the list based on a variety of factors, but accidentally left out Miranda's favorite queen from the original 12 - The Strawberry Queen. So this edition not only rectifies our oversight, but also adds some special powers to her royal Strawberryness - namely that she can't be stolen or put back to sleep!

Powered by TurnTo
Review More Purchases | My Posts
4.7 / 5.0
3 Reviews
5 Stars
4 Stars
3 Stars
2 Stars
1 Star
2
1
0
0
0
Rated 5 out of 5
Favorite Game
This is one of our favorite games! I buy them in bulk-this and Rat-A-Tat Cat are our go-to birthday party gifts.
April 14, 2021
Kendle R
Purchased
8 months ago
Rated 4 out of 5
Child's New Favorite
Simple game that incorporates light strategy, math, and memory skills. My 4 yr old loves this game. She needs a bit of help with the math card trade in component, but otherwise fully understands the rules. Good with two players, but more fun with 3+.
July 8, 2020
Mike D
Purchased
1 year ago
Rated 5 out of 5
A fabulous game!
Such a fun game for girls and boys alike! It has been our “go to” present for a while. Games usually take 10-20 mins to play. Highly recommend!
July 20, 2019
User
Purchased
over 2 years ago 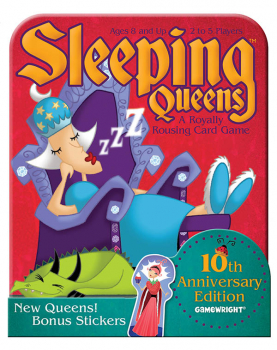