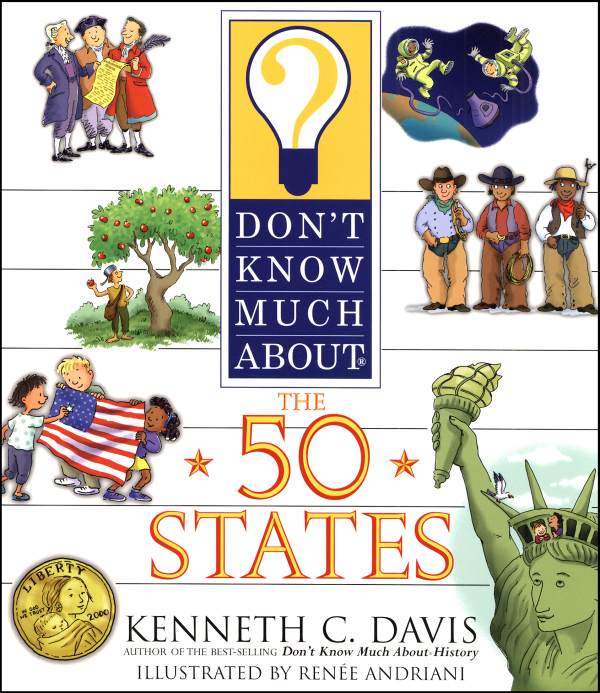 Don't Know Much About the 50 States

Written in a similar style to the other Don't Know Much About books, this journey through the 50 states presents several questions and answers about each state as it is covered. Each page features one state (except for Texas, which of course needs two), with a small outline map of the state and other basic facts about the state, including the state bird and flower near the top of the page. Then several questions about the state are posed, some about more basic information about the state, and some involving more trivia-like information, such as "How many trees does it take to make a gallon of maple syrup?" for Vermont,"What is a keystone, anyway?" for Pennsylvania, or "Why were Nebraska's first settlers called 'sodbusters'?" for Nebraska. Other small interesting facts and state jokes are included as well. Also, a complete map of the U.S. is featured inside the front and back covers. Not a comprehensive look at each state, but an entertaining and informative read.

This is one of the most straight-forward programs for covering this material thoroughly that I've seen. Using the book Don't Know Much About the 50 States as a reference, the Student Guide provides a consumable workbook for basic information on the regions of the United States and then state-by-state (postal abbreviation, capital, nickname, and fun facts). There's also a solid geographical component as the student marks famous cities and landmarks on each state's map, as well as landform lessons. (You'll need a good set of colored pencils for these activities.) Memorization of the states/capitals/abbreviation is practiced and recited. Regional reviews are provided periodically, as well as regional quizzes and a final test. The Teacher Guide provides some general teaching guidelines, student pages with answers, and the quizzes and final test (copies with and without answers). Lesson Plans, which are not included in the package, provide teaching guidelines plus a set of brief weekly checklists for 30 weeks' of lessons. This course does not include any Christian content. 84 pgs, student; 117 pgs, teacher; both pb. ~ Janice

Powered by TurnTo
Review More Purchases | My Posts
4.0 / 5.0
1 Review
5 Stars
4 Stars
3 Stars
2 Stars
1 Star
0
1
0
0
0
Rated 4 out of 5
Nice
This is a cute little book. I enjoy the little "did you know" boxes. Hopefully it will help the kids learn their states. Only downside was that it seems to be geared towards little kids (maybe preschool to second grade?)
July 16, 2022
Alexandra E
Purchased
7 months ago 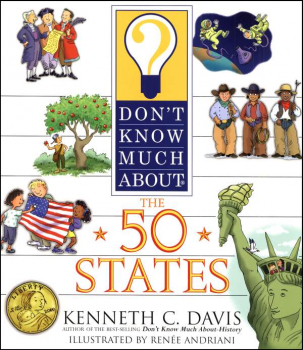