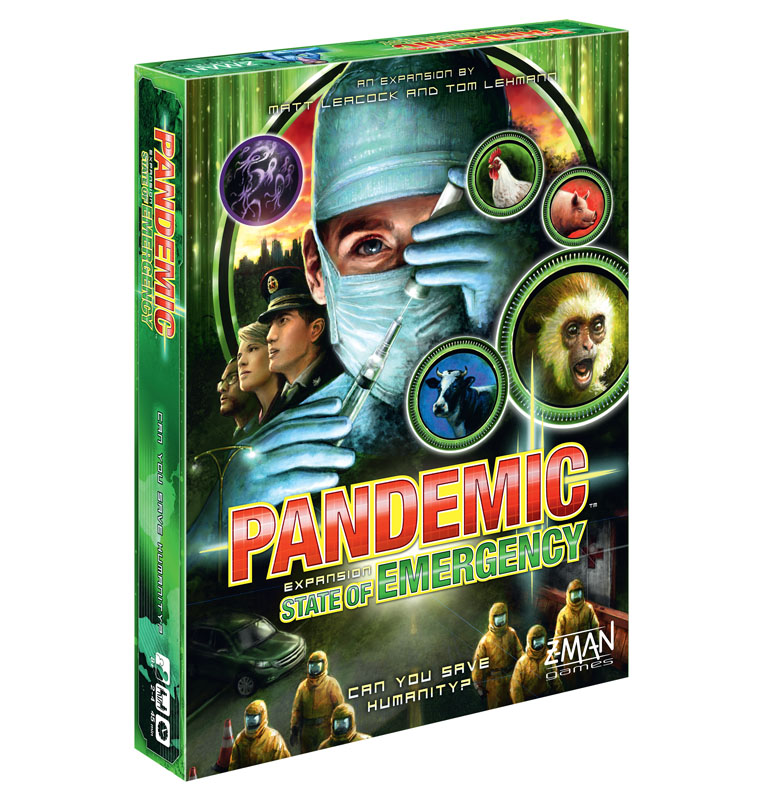 As if developing a cure for a super-virus wasn't difficult enough, the third expansion for Pandemic includes 3 all-new challenges to make saving the world that much harder! Requires Pandemic to play.

Your job of curing deadly diseasesis about to get more difficult.State of Emergency, the third expansion for the hit cooperative gamePandemic, introduces three modules that provide unique ways to play and give you greater control over each game's difficulty. Take on one of five new roles as you tackle the Hinterlands Challenge and investigate disease strains that jump from animals to humans. Travel to four locations spread across two new boards as you trace diseases to their source. If you don't act quickly, they'll soon spread to nearby cities and become even harder to contain. The Superbug Challenge raises the stakes even further by introducing a fifth disease that cannot be treated. Instead, players must collaborate toproduce vaccine doses and eradicate the superbug before it's too late.

WithState of Emergency,you can fine-tune the difficulty of yourPandemicgameseven further. Take greater control over the diseases, or make things more unpredictable. If diseases overwhelm youtoo often, use quarantine markers to slow down how quickly theyspread. Use an action to impose a quarantine on a city and prevent the next two attempts to place disease cubes or perform an outbreak. If you want to inject increased difficulty into your games, the Emergency Event Challenge is for you. This peppers the player deck with Emergency Event cards that have nasty, unpredictable effects such as restricting players' movement or reducing their maximum hand size. Only the most seasoned players can overcome this challenge!

If you think cooperative games are just for kids, this brilliant game will change your mind! 2-4 players work together as members of a highly skilled task force as they try to cure four infectious diseases spreading throughout the different regions of the world. Each player may perform four actions per turn including treating a disease, traveling to another city, or passing a card to another player. Randomly chosen role cards assign occupations to each team member at the beginning of the game and provide different advantages to the basic actions, based on the unique skill set of that member. With outbreaks looming and epidemics increasing the rate of infection at unknown intervals, you'll need seamless teamwork and careful planning in order to discover the cures and save the world. Built-in features such as random shuffling, five different role cards, and a flexible amount of epidemic cards provide a different game every time and allow for easier to harder levels of play. A very cleverly designed game that will take all your wits and may still beat you! 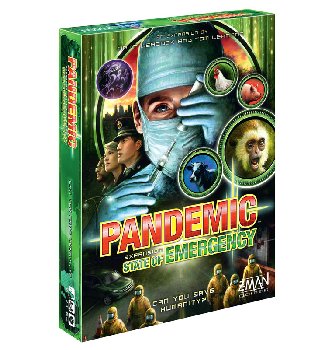