A delightfully historical take on the classic cooperative game, this alternate version doesn’t see a disease taking the Empire down - rather, corruption and barbarian tribes seek to do Rome in. In a manner similar to the original pandemic game, players embody different role cards and attempt to “cure” all opposing forces and clear them from the map. While many of the gameplay mechanics are simply repurposed for the theme, such as cubes representing barbarian tribes instead of diseases and “invading” rather than “infecting”, this game does have some twists. Some smaller examples are the way players and cubes can move. There are no “flights” in this game - the closest you can get is chartering a ship from one port city to another. Invasions are not random; rather, each invasion card has a “migration path” of cities the barbarians (cubes) follow to invade cities. Barbarian tribes can be “cured” (you can forge an alliance), but they cannot be eradicated even if all cubes are removed from the board and, as such, will continue to invade throughout the game. Adding a new level of strategy is the ability to stock cities with legions, which means players can battle invasions. How well these battles go, however, is affected by die rolls. Legions can either be left stationary in cities, preventing barbarian tribes from invading that particular city, or they can march with a player’s pawn to clear a city of barbarians. Legions are limited, so which cities are most important to defend? When is the most opportune time to attack? My favorite difference from the original, is that event cards have a “corrupt” option which makes their advantageous effect more powerful, but sends the Roman Empire farther down the path of decline. As in the original, players can lose in multiple ways…the Empire hitting ultimate Decline, running out of cubes to place, running out of player cards, or the city of Roma being sacked. Game is for 1-5 players and takes 45-60 minutes to play. Game includes 5 barbarian/alliance tokens, 1 invasion rate marker, 1 decline rate marker, 6 forts, 7 pawns, 7 role cards, 49 city cards, 14 event cards, 7 revolt cards, game board, and instructions for play. ~ Janine

Combining the cooperative gameplay of Pandemic with innovative new mechanics, Pandemic: Fall of Rome takes players back in history to the time of the worlds greatest empire: Rome. A weakened military has left the borders open to invasion from countless tribes such as the Anglo-Saxons, Goths, Vandals, and Huns. As you march through the Roman Empire, you must recruit armies, fortify cities, forge alliances, and face off against the invading hordes in battle. Take on unique roles with special abilities to improve your teams chances to protect against the invaders. Work together, use your skills wisely, and stop the fall of Rome!

If you think cooperative games are just for kids, this brilliant game will change your mind! 2-4 players work together as members of a highly skilled task force as they try to cure four infectious diseases spreading throughout the different regions of the world. Each player may perform four actions per turn including treating a disease, traveling to another city, or passing a card to another player. Randomly chosen role cards assign occupations to each team member at the beginning of the game and provide different advantages to the basic actions, based on the unique skill set of that member. With outbreaks looming and epidemics increasing the rate of infection at unknown intervals, you'll need seamless teamwork and careful planning in order to discover the cures and save the world. Built-in features such as random shuffling, five different role cards, and a flexible amount of epidemic cards provide a different game every time and allow for easier to harder levels of play. A very cleverly designed game that will take all your wits and may still beat you! Expansions require the Pandemic (#034499) base game to play. 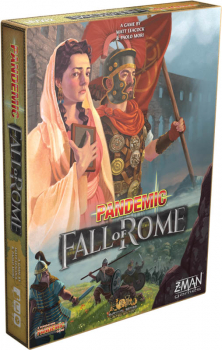