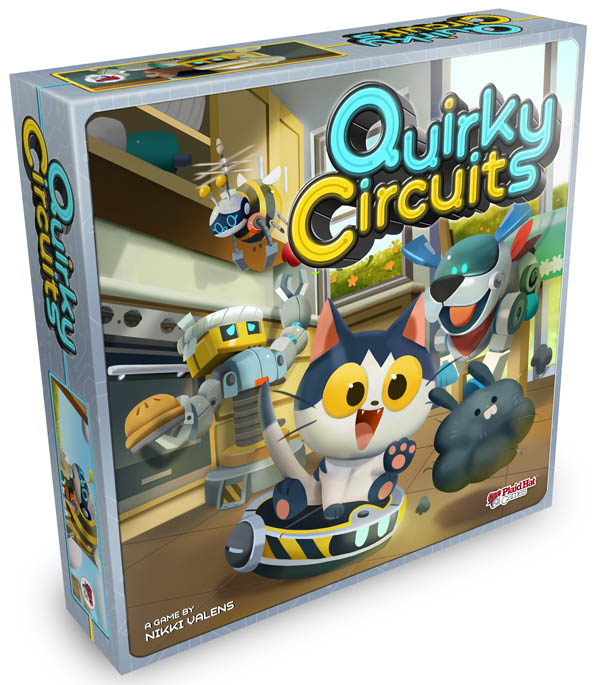 The cutest robot game you’re likely to play, Quirky Circuits combines adorable characters with a bit of spatial reasoning, a smidge of programming, and a dash of luck. A turn of the unique “storybook” board reveals a new scenario and goal for your robot buddies to accomplish every page. Each robot moves in a distinct way or has a special ability, and they all have a specific goal to accomplish. One might need to correctly assemble a museum exhibit, another to plant seeds in a garden, and another to clean a room of debris. Players work together to make this happen. Every player has hand of action command cards that cause the robot to move in a certain direction, to turn, to jump, to pick up or drop an object, and so on. Players cannot communicate their intentions or strategy - instead, they play their cards face down, each player contributing at least one action. When everyone has played all the cards they want to play, the cards are turned over in order and the actions must be followed, regardless of the outcome! This means the robots will probably run into some snags accomplishing their mission - running into obstacles, picking up the wrong objects, and so on. If your team of programmers is on the same wavelength, you’ll win the scenario - but if they aren’t, your robot pal will run out of battery power before their mission is over, costing your team a victory. A charming challenge for up to four players. Each scenario takes about 15-30 minutes to complete. Game includes booklet board with 24 missions, 4 paintable robot figurines, 2 double-sided robot reference cards, 93 command cards, 1 battery marker, 1 momentum marker, and 45 scenario-specific tokens. For 2-4 players. ~ 20 minutes per scenario.

Quirky Circuits is a cooperative game of robot programming silliness for two to four players. Each player contributes to the programming of an adorable robo-friend. But be warned - no one knows what commands the other players will be tossing in! Help the little robot complete its task before their battery runs out! With 24 scenarios of increasing intensity, Quirky Circuits is guaranteed to provide hours of brain-bending fun. 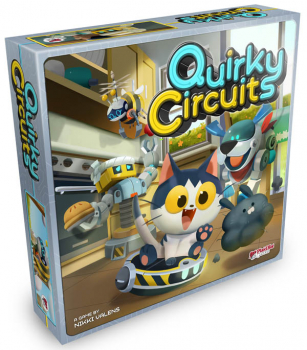