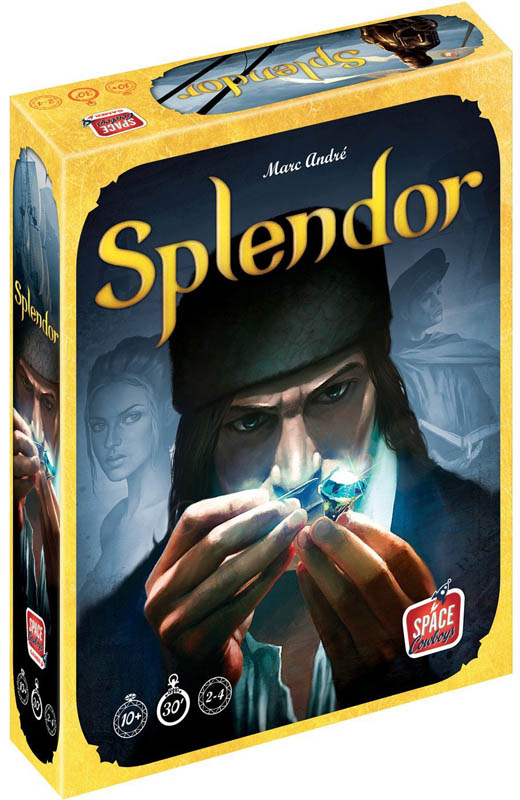 A light, casual strategy game for 2-4 players, Splendor is all about collecting shiny gems and, well, the splendor associated with lots of shiny objects. The premise is simple: three series of mine cards are laid out, each labeled with an associated gem cost, the type of gem it produces, and a number of prestige points the card is worth. The goal is to get 15 prestige points. On his or her turn, each player can either take a few gems from the stockpile, buy a card, or reserve a card for future use and take a wild gold token.

Since each card produces one of the five gems available, cards purchased by the player also count towards future purchases. Each player thus quickly amasses a large number of production cards, allowing them to by higher-tier purchases (which cost more gems, but are worth more prestige). The primary struggle comes from what types of gems to buy. Certain cards are cheaper, but have no prestige value. Others are expensive, or cost a lot of a single type of gem, but are worth several points. Thrown into the mix are nobles, which are given to the first player who gets the corresponding number of produced gems. The number of nobles is limited, and they provide quite a few pointsits a constant challenge to ensure your mines provide the gems you need, while still achieving the quota (and racing others) to acquire a noble. Gameplay is easy to pick up, easy to teach, and only lasts about 20-30 minutes; so it is ideal for small groups of casual gamers.

And I as rich in having such a jewel
As twenty seas, if all their sand were pearl,
The water nectar and the rocks pure gold.
William Shakespeare,Two Gentlemen of Verona

The European Renaissance opened up more ways of becoming rich than the continent had ever known before. New frontiers were emerging throughout America, Africa, and Asia. Global trade routes became a reality. Nobles once content with large castles and fur robes now sought dark sapphires and glittering diamonds. Craftsmen ceased working with iron and began shaping gold; merchants turned their attention away from spices and towards gemstones.

Take on the role of a Renaissance merchant striving to become rich inSplendor, a fast, elegant, and intuitive game for two to four players. You begin by collecting raw gems, then use those to fund the development of mines throughout the world. Once you've mined more gemstones, you will need the means to transport them, artisans to shape them, and finally a storefront where you can sell your polished jewels. If you produce exactly the right jewelry, a powerful noble may become your patron. The player whose jewelry business earns the most prestige wins! 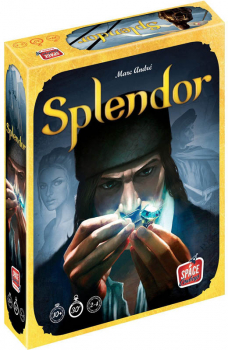