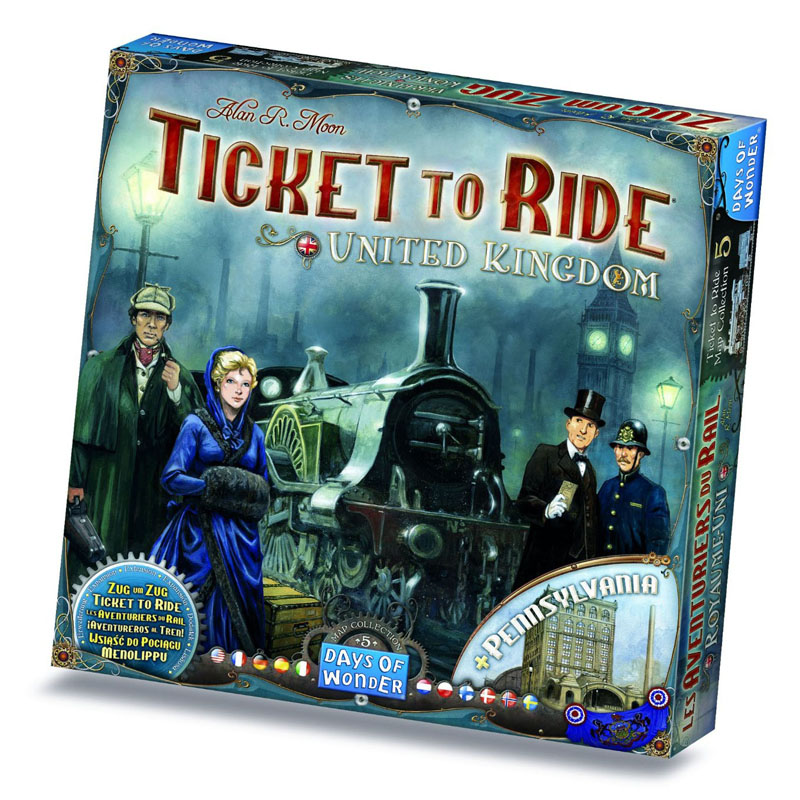 The double-sided board means two expansions in one! The United Kingdom map includes the entirety of England, Ireland, and Scotland, and introduces 116 new train cards, 57 destination tickets, and 47 Technology Cards which allow players to improve their trains. The Pennsylvania map stretches from Ontario in the northwest to Atlantic City in the southeast, and includes 50 new tickets and introduces 60 Stock Cards which allow players to invest in major Pennsylvania railroad companies upon completion of routes.

Place the first rails of the glorious train adventure that all started in the United Kingdom of Great Britain and Ireland in the 19th century. Learn to master the power of steam to build trains that go faster and farther, develop your technologies, and reach the far cities of Scotland and Ireland before your opponents!

Also includes the Pennsylvania map in a state full of railroad history, invest in the most profitable companies to develop your rail network. But do not let your opponents outbid you, or you risk losing the benefits of your investments!

Primary Subject
Games, Puzzles & Toys
Grade Start
3
Grade End
AD
EAN
824968817773
Format
Other
Brand Name
Days of Wonder
Weight
3.25 (lbs.)
Dimensions
11.75" x 11.75" x 1.5"
Powered by TurnTo
Questions that need answers | My Posts
Start typing your question and we'll check if it was already asked and answered. Learn More
Do not include HTML, links, references to other stores, pricing or contact info.
My question is about:

Powered by TurnTo
Review More Purchases | My Posts
5.0 / 5.0
5 Reviews
5 Stars
4 Stars
3 Stars
2 Stars
1 Star
5
0
0
0
0
Rated 5 out of 5
Highly Recommend
Wonderful addition to my original Ticket to Ride. Highly recommend,
December 24, 2020
Paul M
Purchased
1 year ago
Rated 5 out of 5
Enjoyable. It is an expansion pack, so the original game is needed for cards and trains.
October 20, 2020
Nancy K
Purchased
1 year ago
Rated 5 out of 5
Great game -- nice to find this unique item
We love Ticket To Ride and I gave this extension set to a family member with ties to both Pennsylvania and the British Isles. I was excited to find this specialty item. Its a fun gift for families and kids.
June 8, 2020
Elizabeth B
Purchased
over 2 years ago
Rated 5 out of 5
A wonderful company to do business with!
Good price, quick delivery, a pleasure to buy from!
July 4, 2019
Barbara N
Purchased
over 3 years ago
Rated 5 out of 5
My favorite, so far...
Ticket To Ride is a wonderful game on its own - now add the expansion UK/PA version and now you are on a whole new level of fun! The UK version has you purchasing technology as a new twist and the PA version has you receiving shares in train companies as the new twist. Both are great! Every Christmas we add another expansion to our collection...can't wait to add the World & Great Lakes version next! Package arrived very quickly & we are very pleased!
January 9, 2017
natalie m
Purchased
over 5 years ago 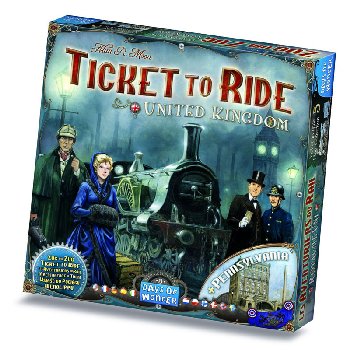