When there aren't many choices, its good when one of the few is excellent. Such is the case with Athenaze. Some years back, my children and I wanted to learn NT Greek. Our pastor agreed to teach a class and we (and a few others) attended. After several months we were ready to progress past the alphabet (do you detect dawning frustration?). Although well-meaning, he just wasn't prepared to challenge us, and his attempts to re-package his seminary course weren't very effective. We would have learned much more Greek had we used Athenaze. With its goal of teaching students to read Greek as quickly, thoroughly, and enjoyably as possible, we would have been exhilarated to discover that Lesson 2 includes a quote from the Gospel of Luke.

There is so much to like about this course that its difficult to know where to begin. First, all language instruction is within the context of ancient Greek culture. A story line runs through the chapters, and although this has been created to serve the instructional purposes of the book, there are subplots based on the writings of Homer, Herodotus, and Thucydides. It is set in the time period of the beginning of the Peloponnesian Wars. The characters are fictional but the story line has been developed from Greek historians and utilizes Greek myths and stories as well as the writings of Greek philosophers. There is a gradual progression toward reading the Greek of these ancient authors. With numerous illustrations drawn from ancient works of art and architecture, most chapters contain essays in English which deepen the students understanding of the history and culture of the Greeks. Now in the revised 3rd edition, student texts and workbooks include much of the same basic content, but feature some nice updates in format and useability such as self-correcting exercises in the student workbooks and additional illustrations.

Vocabulary development is off and running from the very start. [The beginning "stuff" - letters of the alphabet, pronunciation, and writing - is presented in a pre-chapter 1 segment.] Each of the chapters includes at least one vocabulary list which the student is encouraged to study aloud to combine the advantages of sight and sound reinforcement. Additionally, the reading passages are "glossed," meaning unknown phrases and words are listed following the selection allowing the reader to make the translations even right from the beginning. This also allows the use of complete paragraphs or passages, which gives the student much more of a flavor for the language than the initial phrases-then-sentences of many language programs. Word study sections in each chapter highlight the influence of Greek on English vocabulary, providing practice in deciphering the meaning of English words derived from Greek.

Grammar is introduced in small segments followed by short exercises for reinforcement. Although each segment is rather focused in its content, they are frequent and the grammar coverage is thorough. Constant review is advocated. One of the things that most impressed me about this course is the grammatical and linguistic explanations throughout. As with other languages, the student with a comprehensive knowledge of English grammar will be a step ahead. However, by acquiring a command of Greek grammar, the student will also become much more adept at English grammar.

The general structure of the chapters in both books starts with a vocabulary list divided into parts of speech followed by a story passage, word study section, grammar lesson and exercises, historical/cultural essay, another vocabulary list followed by story passage, word building section, grammar lesson and exercises, and a passage with comprehension questions. The chapter concludes with Greek Wisdom (a quote/saying from one of the seven wise men, and short passages from classical and NT Greek. Although the story line reflects classical Greek culture and authors, NT Greek is not ignored. Most chapters (Book 2 moves a little more toward the Greek classical writers) include passages and quotes from the gospels of Luke and John.

Workbook exercises, which tend to be short answer or translation work, cover all of the grammar sections from the textbook and all vocabulary lists. There are periodic cumulative vocabulary lists (every five chapters) arranged by parts of speech. Along with material for grammatical review and consolidation, each workbook "chapter" contains a reading/translation passage. An answer key is included in the back of the book. Although there is room to write in the books, the publisher recommends completing these exercises several times which of course, is most do-able if separate paper is used to record the answers.

The Teachers Handbook contains translations of all stories, readings and exercises; detailed suggestions for classroom presentation of material; abundant English derivatives; and additional linguistic information. Unfortunately, the revised 3rd edition manual is only available as a PDF. If you have purchased the student materials and have not been able to obtain the Teacher's Handbook PDF, please reach out to our consultant team.

Book 1 contains 16 chapters. I am assuming a student would spend about two weeks on each chapter, combining the text and workbook assignments with constant memorization and review. Book 2 continues with chapters 17 through 25. Each book would be a meaty, one-year high school level course. This is Greek for the serious student - one who is willing and ready to apply himself to the study. There is enough beginning "stuff" that a student could start directly into this course. However, I can also see some advantages - particularly for a younger student (Jr. High) - in doing some preliminary work in a program like Hey, Andrew! Teach Me Some Greek. ~ Janice 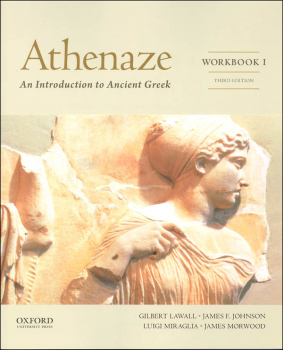