You may have seen or heard of the Standard Deviants before on PBS and know how entertaining and educational they are. If not, you might just have to try these DVDs for yourself. Basically, on each DVD a team of young adults tackles a big subject such as grammar, physics, or a foreign language. They break it down, rule by rule and concept by concept, and present both written and spoken examples as well as little skits to reinforce the concept. The result? Well, to me it seemed like something like a Sesame Street for "big kids." One critic followed this same line of thought by calling it "something between Sesame Street and Saturday Night Live." Widely acclaimed both in the classroom and at home, these programs keep the kids riveted and entertained. Don't overlook their educational content, though. Written by a team of academic professionals, it only looks like these concepts are being presented in such an understandable way by clever, intuitive teens. While every minute of the programs build on an educational concept, they work in as much fun as possible too. Often the mini-skits, or background stories are spoofs of a well-known show or movie, such as Indiana Jones in the Algebra 1 DVD. While not providing the student an abundance of practice with a concept, they don't gloss over a subject, with the resulting DVD being between an hour or two in length. And, of course, being a DVD, if they didn't catch something the first time, they can always back up and watch again. (You may want to keep a pencil and paper handy for taking notes, as the DVD's do not include booklets or handouts.). So, if you're having trouble teaching a certain subject, or they're having trouble understanding a subject, sit them down with one of these. Chances are they'll not only learn the concepts, they'll have them permanently ingrained, too!

The English Composition DVD covers everything you need to know about English composition: stating and supporting a position, free writing, purpose, journals, outlining, getting feedback, the thesis statement, paraphrasing, the conclusion and a whole lot more. You'll feel a real boost in confidence after going through this award winning 2 hour 15 minute program. We also offer packs which combine several DVDs on each topic, in case you want the "whole package." 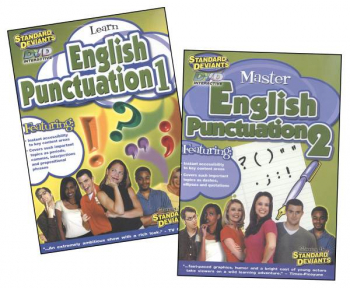