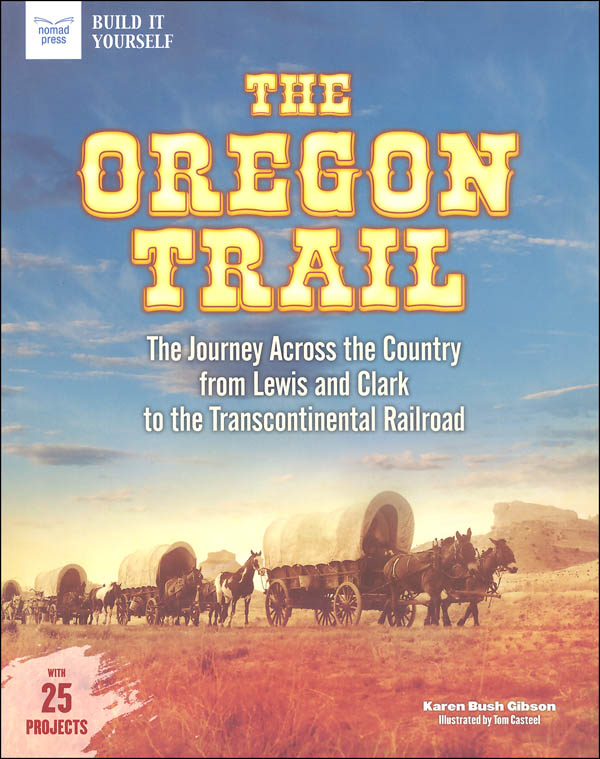 Oregon Trail: Journey Across the Country from Lewis and Clark to the Transcontinental Railroad with 25 Projects

This is a great resource if you’re planning on studying the Oregon Trail, as it provides an overall history of the trail and what it was like. Readers learn how the Oregon Trail came about, what everyday life consisted of on the trail, and how the transcontinental railroad changed and revolutionized travel. Complete with helpful definitions, interesting facts, and fun activities, this would be an entertaining and educational book for any elementary age child. The 25 activities encourage further research and include painting the Oregon Trail, writing a treaty, creating a newspaper, and mapping out a railroad route. 120 pgs, pb.

Westward ho! If you travel across certain parts of the United States, you can still see wagon wheel ruts where people crossed the west in search of more opportunity and better lives more than 200 years ago!The Oregon Trail: The Journey Across the Country from Lewis and Clark to the Transcontinental Railroadoffers readers ages 9 to 12 a fascinating look at the explorers and settlers who traveled this route during the westward expansion of the United States.

When America received its independence in 1776, the new country was made up of 13 colonies that became the United States of America. European immigrants continued to arrive in the new country, eager to make new lives for themselves and their families. By 1803, there were 17 states and a need for even more space. The United States doubled its land area with the Louisiana Purchase in 1803. President Thomas Jefferson commissioned the Corps of Discovery to explore and map a territory that had only been seen by fur trappers and the Native Americans who lived there. The expedition into the American west, more popularly known as the Lewis and Clark expedition, left from Independence, Missouri for more than two years of exploration that produced a route for American settlers to take. The route was the Oregon Trail, also known as the Oregon and California Trail.

InThe Oregon Trail: The Journey Across the Country from Lewis and Clark to the Transcontinental Railroad, readers ages 9 to 12 can delve into the explorations of Meriwether Lewis and William Clark and other explorers. They can learn about the more than half a million people who followed during the nineteenth century. What challenges did these pioneers face on the 2,170-mile journey? How were Native American tribes and nations affected by this mass migration? Primary sources allow readers to feel like a part of the Oregon Trail experience while biographical sidebars will introduce the compelling people who were part of this time in U.S. history. Investigative, hands-on projects and critical thinking activities such as writing a treaty and researching artistic impressions of the Oregon Trail invite readers to further their understanding of life on the trail, early towns and forts, and the Transcontinental Railroad that followed the wagons into new lands and territories that would eventually become states.

Category Description for Build It Yourself Series:

Hands-on activities are great for adding some fun to your learning, especially when it comes to an exciting subject like these different historical periods. Each book provides 25 or more hands-on building projects and activities that only require easy-to-find materials like drinking straws, spray paint, rope, newspaper, flour, foil, etc. Detailed step-by-step directions are given for each project. There are lists of materials needed and an estimated time it should take to finish each project, but there's much more to these books than just the activities. Each project is combined with historical facts, anecdotes, biographies, and trivia that somehow ties in with the project. Text boxes, captivating "Did You Know?" segments, and "Words to Know" sections (which define various historical terms) all come together to get the most educational value out of the fun hands-on projects in the books. Included are black and white illustrations and diagrams that add a lot of interest to the information. So, learn about Ancient Egypt as you build your own papyrus boat or bake some flatbread; become a pioneer out west as you construct replica sod houses, learn to cross stitch, and make your own butter; send secret coded messages and construct your own model Anderson shelter as you learn about WWII; sip homemade apple cider as you learn about colonial America and make your own yarn and cloth; and journey to medieval times as you make a model thatched roof, construct a mini trebuchet, create beautiful grails and stained glass, and so much more. With tons of fun projects and great information, these books are great supplements to any history study. Each book is 122 pgs, pb. ~ Rachel 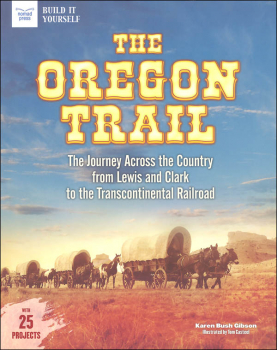 Oregon Trail: Journey Across the Country from Lewis and Clark to the Transcontinental Railroad with 25 Projects
Item # 075187
Retail: $17.95
Rainbow Price: $13.50
Your Cart ()
Cart Total:
Continue Shopping Proceed to Checkout