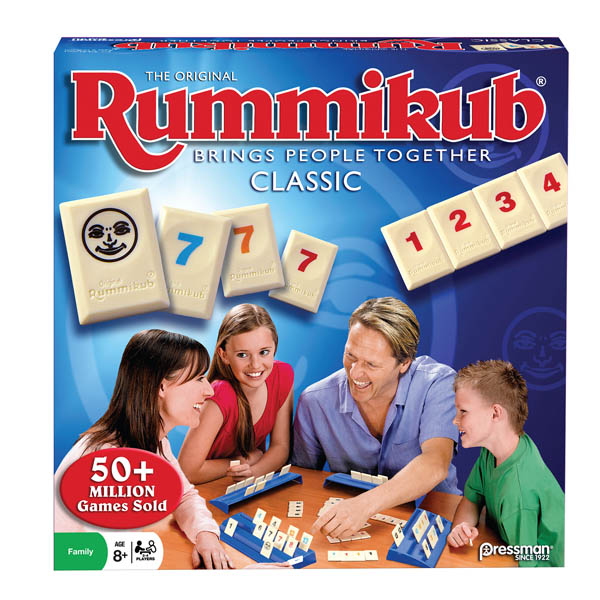 Similar to the card game Rummy, this game challenges players to be the first to play all the tiles on their rack. Tiles are numbers 1-13 (plus Jokers) and the numbers are in 4 different colors. Players make sets by placing at least 3 tiles of the same number or three consecutively numbered tiles of the same color, down on the table. Once a set is played, other players may add to the set or even remove tiles from sets to make new sets (providing they leave at least 3 in the original set). As more tiles are laid down, more moves are possible. If a player cannot, or chooses not to, play a tile on their turn, they draw a new tile from the pool. The first player to play all of their tiles calls “Rummikub” and the other players have to score all the points left on their racks. 2-4 players.

Rummikub is one of the world's best-selling and most-played games. It has all the elements that make a great game. It's easy to learn and fast moving. The "board changes all the time as players adjust the tiles on the table. It combines luck and strategy and it changes quickly so every player has a chance to win until the very end. Players take turns placing numbered tiles in runs (consecutive numbers of the same color, like 2, 3, 4 in red) and groups (three or more of the same number in different colors, like a red 9, a blue 9 and a black 9), rummy style. The Joker tiles add to the fun; they can be any color or number. The object is to be the first to play every tile on your rack.

Rummikub is ideal for people of different ages to play together, and it's great for a game night too. When kids play, it reinforces STEM and STEAM concepts such as sequencing, pattern recognition and planning skills. It's got lots of exciting moments, but it's also designed to bring people together, with plenty of opportunities for talking, chatting, and sharing with family and friends. For 2 or more players, ages 8 and up. 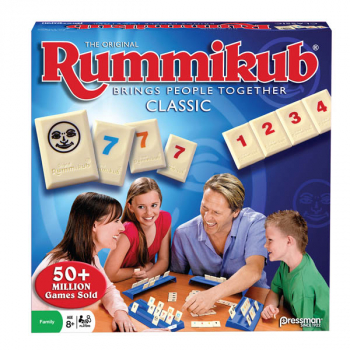