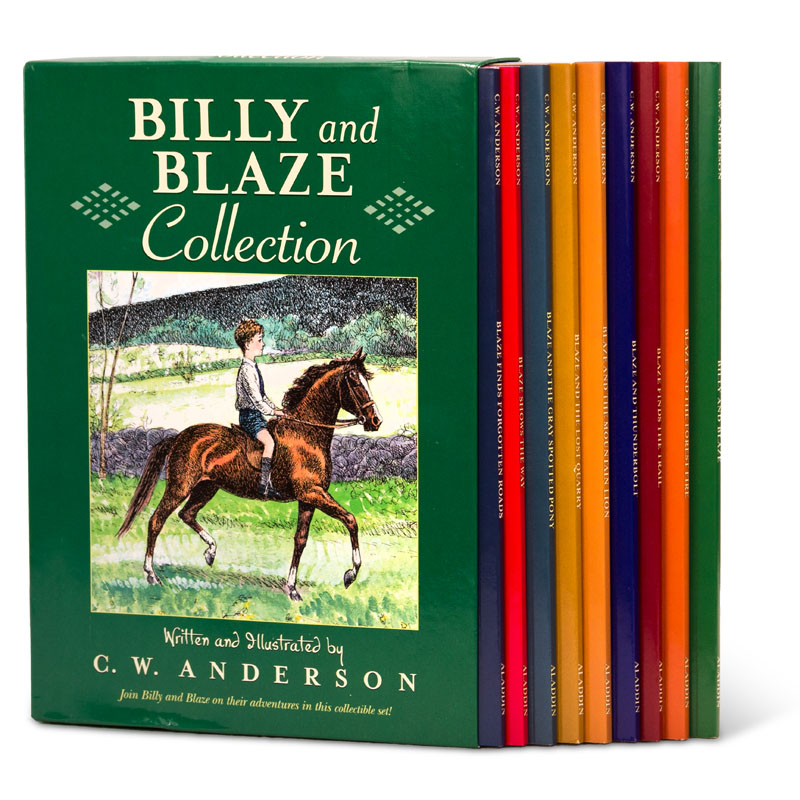 Nine books of the beloved Billy and Blaze series from C.W. Anderson are now available together in a collectible boxed set!

In Billy and Blaze, Billy gets his very own horse for his birthday! They make a great team, but are they good enough to win the silver cup at the Mason Horse Show?

In Blaze and the Forest Fire, Billy and Blaze spot smoke in the brush, and immediately race around the woods to sound the alarm. At the end of the day, they are rewarded with carrots for Blaze, cake for Billy, and a very special present that they can share.

In Blaze Finds the Trail, Billy and Blaze go exploring a new road. Before they know it, the sky grows dark with a coming storm, and Billy can't figure out how to get out of the woods. Can Blaze find the trail and get them home safely?

In Blaze and Thunderbolt, Billy's friend Jim is unable to tame a wild horse called Thunderbolt. But with their gentle approach, Billy and Blaze may succeed where others have failed.

In Blaze and the Mountain Lion, Billy and Blaze come face to face with a ferocious mountain lion! Fortunately, they are able to chase it into its cave and save a frightened calf. But can Billy and Blaze chase the lion away for good?

In Blaze and the Lost Quarry, Billy and Blaze find an abandoned quarry. But they aren't the only ones who know of it--they arrive just in time to see a dog fall into the water! Will they be able to save the dog?

In Blaze and the Gray Spotted Pony, Billy and Tommy see a small gray spotted pony in a field. Tommy knows immediately that this is the pony of his dreams. Will Tommy's wish come true?

In Blaze Shows the Way, Billy and Blaze show Tommy and his horse, Dusty, how to be as great of a team as they are. Soon, Tommy and Dusty are good enough to enter the pairs jumping class with Billy and Blaze!

In Blaze Finds Forgotten Roads, Billy and Tommy lead their horses down an unfamiliar path and spend the day exploring. But at the end of the day, neither Billy nor Tommy remember how to get back. Can Blaze lead them home?

Category Description for Billy and Blaze:

A classic series of stories about the adventures of a young boy and his horse. The books contain wholesome material for the young reader, and if your child is not a horse lover when he starts the series, he may be soon!

Powered by TurnTo
Review More Purchases | My Posts
5.0 / 5.0
3 Reviews
5 Stars
4 Stars
3 Stars
2 Stars
1 Star
3
0
0
0
0
Terrific horse adventures for kids!
A wonderful—classic!—author & illustrator! I grew up horseback riding, and this author is spot on for little ones to learn about & explore the horse world in a book! One interesting thing though—the kids don’t wear helmets at all in the books (safety wasn’t as vogue back then) but other than that, Billy seems an exemplary character & his pony is heroic!
My 6 year old, a veracious reader, read all nine books in part of a day! So they’re addictive!
May 31, 2020
Charlotte H
Purchased
4 months ago
7 Yr Old loves it!
My daughter absolutely loves this collection and the read them all in 2 days! The illustrations are gorgeous too! Highly recommend.
May 30, 2020
Jennifer A
Purchased
4 months ago
Loving this collection.
Great stories. My daughter needed a bit more practice with reading independently and these worked perfectly. They are short so the reader can feel accomplished and and they are engaging. After every book she cannot wait to share what happened.
August 10, 2019
Megan D
Purchased
1 year ago 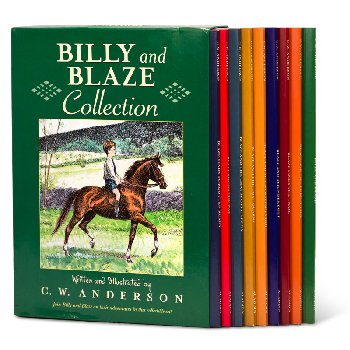