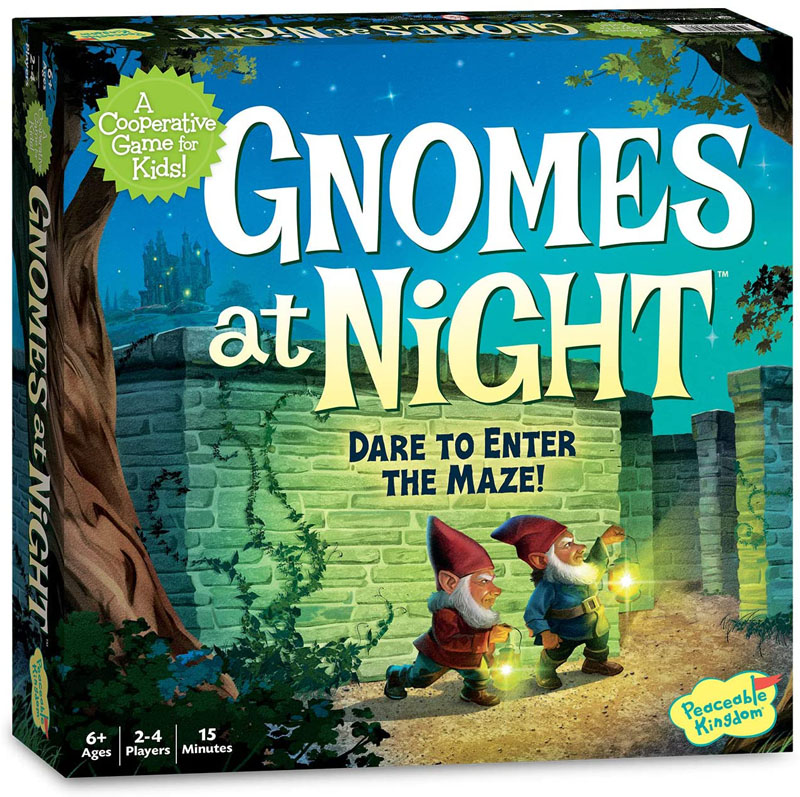 Some rapscallion has made off with 12 of the Queen’s treasures and, in their haste, dropped them throughout the castle labyrinth. Two gnomes are enlisted to help recover the treasure before morning – but there’s a catch. The board stands upright with the two gnomes magnetically connected to each other on opposite sides; each side has different allowed paths and 6 of the 12 treasures. Players must work together, alternately moving their partner’s gnome through obstacles and giving their partner directions as they recover one treasure at a time. Teams may also play, taking turns as they retrieve color-coded treasures. Quick and effective communication is the only way to ensure victory, as time is not on the gnomes’ side! For 2-4 players. ~15 minute playtime.

ARE TO ENTER THE MAZE: Gnomes at Night is a cooperative search-and-find maze game where players work as a team to maneuver the magnetic gnome movers around the maze. Work together in this quick-thinking communication game where every second counts! CALLING IN THE GNOMES: Twelve of the Queen’s most priced treasures have been stolen! The thief was last seen running through the castle’s stone maze, dropping objects in his haste to get away. It up to the gnomes to find the treasures and return them to the Queen before morning. Can you help?

TOYS THAT TEACH: Gnomes at Night is a great way to develop effective communication skills. Players race to identify the treasure as shown on the card to determine which side of the board that treasure is located on. Players work together maneuvering through the maze, sometimes you will be able to move easily toward the treasure, sometimes you will need to back track. Using descriptive language like left, right, up and down will help your teammate better assist you in collecting that treasure. 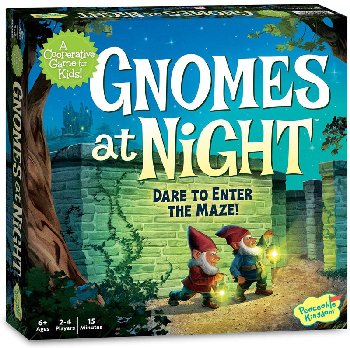