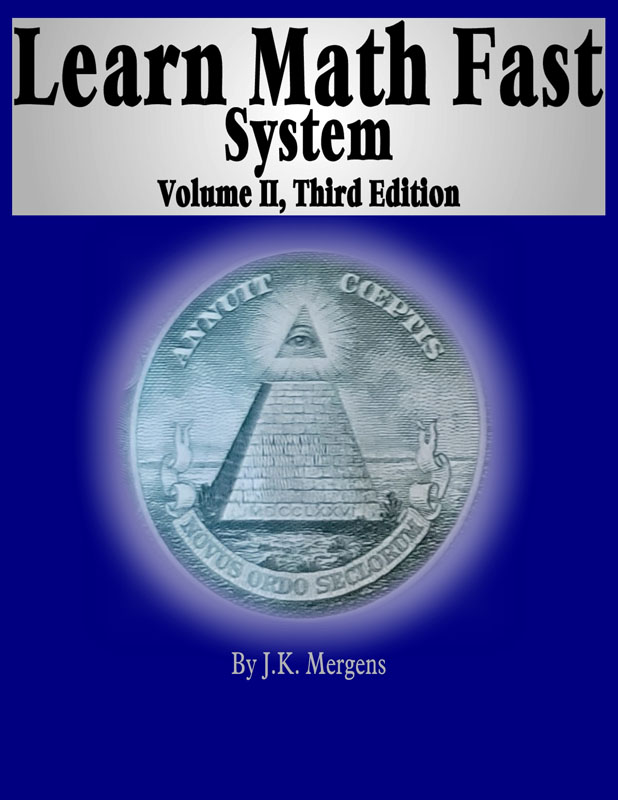 This is the second book in the Learn Math Fast series. It starts with fractions and then continues to decimal numbers and percentages. By teaching all three of these together, students can see the relationship between them. For example, we start with a dollar bill because it has a big "1" right on it. Next, we show that four quarters equals one dollar, every kid knows that. We go on to explain that each of those coins are ¼ of the dollar, in other words, "one of the four pieces that it takes to make ONE." And all kids know that a quarter is 25 cents, so we teach them that 1/ 4 = .25. Finally, we show that a quarter is 25% of one dollar. Using examples that kids already understand makes the new concepts easier to learn, recall, and master. That is how the Learn Math Fast System can teach two years of math in about two months.

Other topics taught in volume 2 include cross multiplying, cross canceling, mixed numbers, negative numbers, and reducing fractions. These concepts are typically taught in the fourth and fifth grade, but there is no mention of grade level anywhere in the book. Each book cover looks as intellectual as the last, so older kids won't be embarrassed to carry a book that is below their grade level.

Every book in the series contains all lessons, worksheets, tests, and answers. A Teacher's Guide isn't necessary because it is self-directing.

Purchase the Big, Big Bookmark (sold separately) for a handy bookmark full of all the easily forgotten math concepts.

Looking for a streamlined curriculum with targeted goals spanning from beginning math to High School Geometry? The title’s fast highlights this 7-volume 2nd edition curriculum’s goal: to develop students who can quickly produce automatic, confident responses to math problems. This mastery-based program presents math concepts in a sequential manner. Topically arranged, each of these un-graded levels handles multiple concepts and can be used by multiple ages as a supplement or stand-alone. More mastery-based, this program can help shore up math skills or help struggling learners who are behind in levels. No matter your student’s grade, the author recommends starting at Level 1. However, free placement tests are available from the publisher’s website to either complete online or print. (http://learnmathfastbooks.com/placement-test-i.html) Level 1 contains 4 instruction pages for using the overall program with different aged learners. No teacher guide is available; answers and detailed solutions (which vary based on level) are included in the back of each book.

Each softcover book includes detailed lessons written in a conversational—and sometimes humorous—style at a 3rd-4th grade reading level. At the lower levels, topics are introduced using a few different methods including tips and shortcuts and using U.S. coins as manipulatives. Concepts are taught, a practice worksheet follows, and then there is a timed test. Students practice until they feel confident on the concept and complete the test before moving on to the next concept. At higher levels, students are taught the concept and complete a worksheet, with the possibility of repeated practice through free worksheets. All levels include chapter tests and a final review test. Geometry requires a manipulative kit, included in the set.

Students can write in the book but it is designed as a non-consumable and unlimited downloads of worksheets are available at the publisher’s web site with the included code.

Supplemental materials include a water- and tear-proof, 8.5x11” Big, Big Bookmark which serves as a reference guide of main math concepts for all books. For Geometry (2nd ed), the Smart Cards include four 3”x 6 1/2” postulate cards; 5 smart cards to review rules for angles, triangles, quadrilaterals, polygons and circles; a form to make a cube; and a pencil. The Geometry Kit (contained in a zippered vinyl pouch with 3-hole punch) is a simple, helpful set that includes 15 1-inch foam squares; a 1-inch plastic ball; protractor and two kinesthetic cards which help teach Pi; a square foot paper; a formula card; a square, rectangle, and one each of an equilateral, right triangle, and isosceles triangle cards with helpful reminders printed on one side. Books range from 148-348 pgs, pb. ~ Ruth 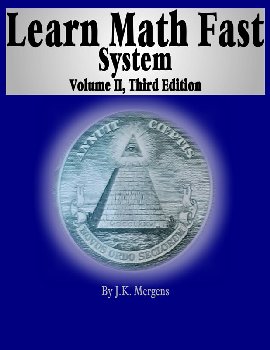