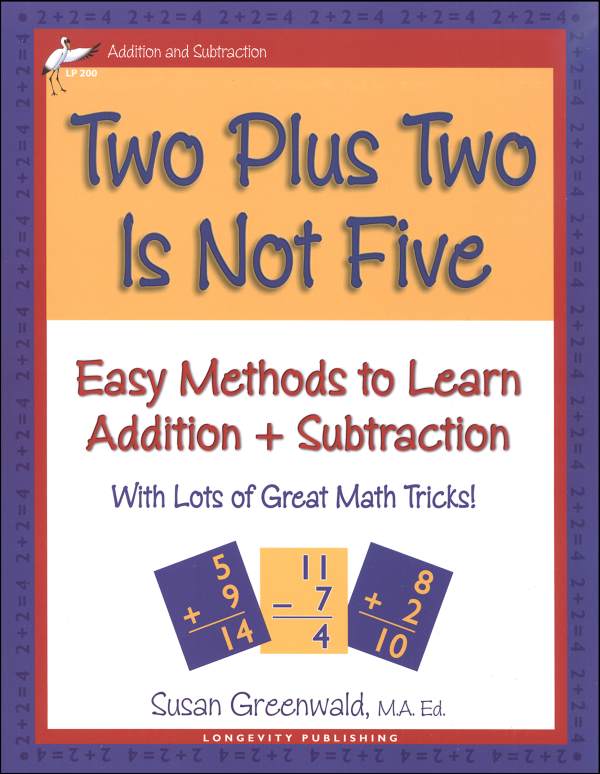 Two Plus Two Is Not Five: Easy Methods to Learn Addition and Subtraction

Mastery of basic math facts is the goal of this 232-page reproducible book. Unlike other books, counting and the tricks taught here are to aid in the memory of the facts, not used as a substitute. You will need a set of math flash cards to implement the program, unless you want to make up your own. You can start at Tier 1 with a beginning student or begin wherever needed with a remedial student or one who already has mastered some of the facts. There are six tiers in the book; beginning with the second, all math facts from previous tiers are reviewed. Each tier section begins with a page of instructions and information for using the worksheets within. For each math "trick," corresponding math fact cards (flashcards) are assigned. Math fact cards should be added to and practiced daily. The tiers are not organized by number sequence (first introducing all +0, then all +1 facts, etc.), but by ease of learning for children. So, in Tier 1, the following "tricks" are presented: Number +1, Doubles (1's, 2's, 5's), Backwards 1; Doubles (1's, 2's, 5's, 3's); Zero; Doubles (1-5); Doubles Subtraction; Right Next to Each Other; Doubles Subtractions; 2 Ladder. In between pages that introduce and model the tricks are review pages, making the program very incremental and "fail-proof". Text is clean, problems nicely spaced, and both horizontal and vertical forms are practiced. A Record-Keeping Checklist allows students to track their progress through the tricks and tiers. The Math Facts Baseline Recorder lists all 81 addition and subtraction facts. As facts are mastered, they are circled on this sheet.

One of the major selling points of this book for me is that corresponding subtraction facts are introduced right alongside the addition facts, rather than treating the memorization of subtraction facts as a separate skill. In my experience, subtraction and division kind of just come along with memorizing addition and multiplication tables. The other is that it looks like it will accomplish the goal. Too often, kids don't quite master these tables and must resort to counting up, skip counting, using their fingers, or consulting a calculator. This adversely affects their computational speed which will increase their frustration and be a hindrance in timed tests. It's best to "bite the bullet" and commit these to memory. If your child is just starting into math facts, or struggling with them, I highly recommend this volume. Once you finish it, you'll be ready for Five Times Five Is Not Ten by the same author.

Powered by TurnTo
Review More Purchases | My Posts
5.0 / 5.0
1 Review
5 Stars
4 Stars
3 Stars
2 Stars
1 Star
1
0
0
0
0
Rated 5 out of 5
A Lifesaver!
My daughter has epilepsy and a math disability due to autism. She has struggled with trying to learn math facts or rota as we used to call it. This book has helped her immensely. The author organizes the facts in a way that easy to remember, plus gives tricks and hints to help them retain them. Very affordable as well.
February 13, 2022
Michelle D
Purchased
1 year ago 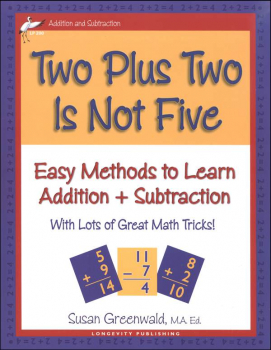