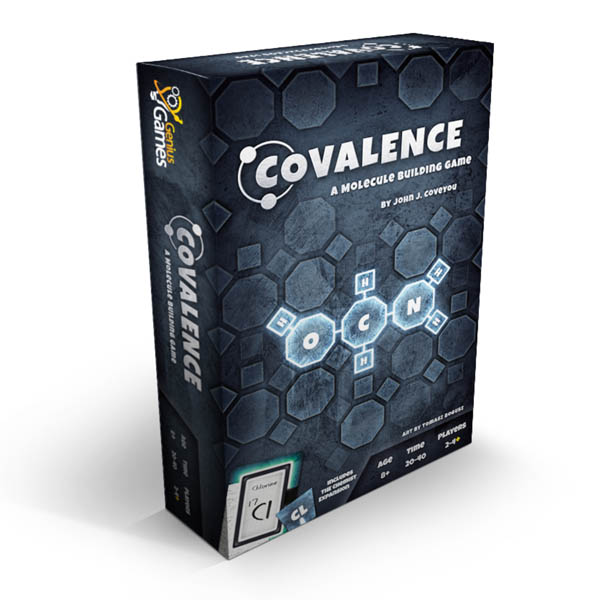 The game includes 25 Secret Molecule Cards (10 easy, 7 medium, 8 hard); 27 Clue Cards (11 number clues, 16 organic clues); 21 Element Tiles; 21 Hydrogen Tiles; 8 Clue Tokens; and 7 Guess Tokens. It can take 20 to 40 minutes per round of play, and play ends when a team figures out the Secret Molecule. Each Builder begins with 3 Carbon tiles, 2 Nitrogen tiles, 2 Oxygen tiles, and 7 Hydrogen tiles. Determine the difficulty level at which you would like to play, and Builders use their Element tiles to assemble a molecule based on the clues given by the Knower. The team wins when they have assembled all their Secret Molecules.

Build on your chemistry knowledge in this challenging molecule building cooperative game. What will be your Secret Molecule? ~ Donna

Covalence is a chemistry-themed cooperative game where players work together to accurately build a number of secret organic molecules. One player has knowledge of a set of Secret Molecules. All other players must deduce what these secret molecules are, based upon clues given to them. Players must cooperatively construct their molecules before the clues run out!

Primary Subject
Science
Grade Start
3
Grade End
AD
EAN
748252187543
Format
Other
Brand Name
Genius Games
Weight
0.85 (lbs.)
Dimensions
8.38" x 5.12" x 1.5"
Powered by TurnTo
Questions that need answers | My Posts
Start typing your question and we'll check if it was already asked and answered. Learn More
Do not include HTML, links, references to other stores, pricing or contact info.
My question is about: 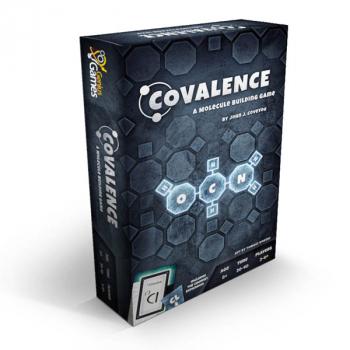