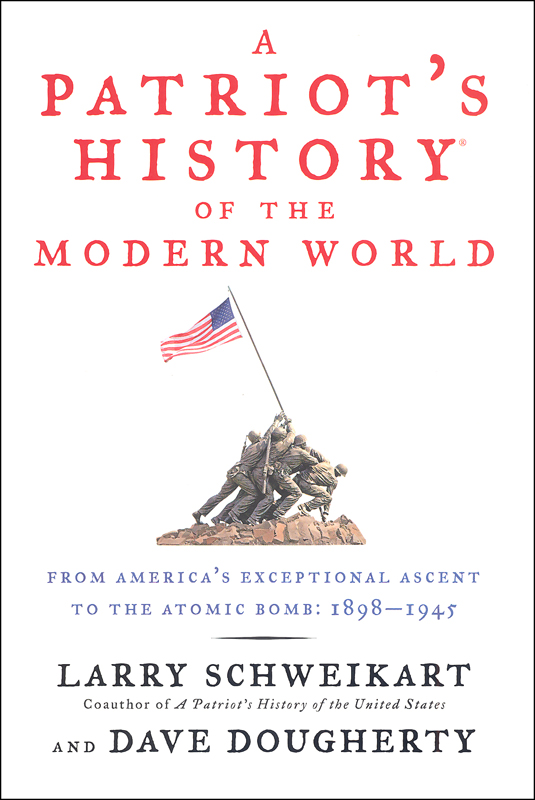 Patriot's History of the Modern World, Volume I: From America's Ascent to the Atomic Bomb, 1895-1945

Volume I covers the period from 1898 (Spanish-American War) through 1945. The book is broken into 5 lengthy chapters that cover pre-WW I, WW I, post-WW I through 1929; the 1930's, and WW II. Each chapter begins with brief highlights of the years covered. The text is informative and engaging, which is a good thing because graphics are non-existent, except for the occasional map. You will appreciate the writing style and content, particularly if you believe that the U.S. has achieved like no other country. The book is 427 pages of text, with another 63 pages devoted to footnotes and index.

"America's story from 1898 to 1945 is nothing less than the triumph of American exceptionalism over liberal progressivism, despite a few temporary victories by the latter. Conservative historian Larry Schweikart has won wide acclaim for his number one New York Times bestseller, A Patriot's History of the United States. It proved that, contrary to the liberal biases in countless other history books, America had not really been founded on racism, sexism, greed, and oppression. Schweikart and coauthor Michael Allen restored the truly great achievements of America's patriots, founders, and heroes to their rightful place of honor. Now Schweikart and coauthor Dave Dougherty are back with a new perspective on America's half-century rise to the center of the world stage. This all-new volume corrects many of the biases that cloud the way people view the Treaty of Versailles, the Roaring Twenties, the Crash of 1929, the deployment of the atomic bomb, and other critical events in global history. Beginning with the Spanish-American War which introduced the United States as a global military power that could no longer be ignoredand continuing through the end of World War II, this book shows how a free, capitalist nation could thrive when put face-to-face with tyrannical and socialist powers. Schweikart and Dougherty narrate the many times America proved its dominance by upholding the principles on which it was foundedand struggled on the rare occasions when it strayed from those principles. The authors make a convincing case that America has constantly been a force for good in the world, improving standards of living, introducing innovations, guaranteeing liberty, and offering opportunities to those who had none elsewhere. They also illustrate how the country ascended to superpower status at the same time it was figuring out its own identity. While American ideals were defeating tyrants abroad, a constant struggle against progressivism was being waged at home, leading to the stumbles of the Great Depression, the New Deal, and the attack on Pearl Harbor. Despite this rocky entrance on the world stage, it was during this half century that the world came to embrace all things American, from its innovations and businesses to its political system and popular culture. The United States began to define what the rest of the world could emulate as the new global ideal. A Patriot's History of the Modern World provides a new perspective on our extraordinary pastand offers lessons we can apply to preserve American exceptionalism today and tomorrow.
Primary Subject
History/Geography
Grade Start
9
Grade End
AD
ISBN
9781595230898
Author
Larry Schweikart and Dave Doug
Format
Hardcover
Brand Name
Sentinel
Weight
1.7 (lbs.)
Dimensions
9.5" x 6.5" x 1.5"
Powered by TurnTo
Questions that need answers | My Posts
Start typing your question and we'll check if it was already asked and answered. Learn More
Do not include HTML, links, references to other stores, pricing or contact info.
My question is about: