In this powerful memoir, Elie Wiesel tells the story of his teenage years as a Jewish boy in Transylvania in the 1940s. With straightforward explanation of events and his own thoughts, Wiesel shares how restrictions against Jews slowly increased, how his family and friends were moved to a ghetto, how he was separated from his mother and sister and never saw them again, how he watched his father slowly change and die, and how he endured the horrors of Auschwitz. The explanations aren't terribly graphic, but you do get a realistic picture of the atrocities that were committed. Though the memoir itself has been around for more than forty years, this is a new translation by his wife, Marion Wiesel, who corrects some details and more accurately renders his testimony in English. Also includes a new preface and a copy of Wiesel's Nobel Peace Prize acceptance speech. 120 pgs, pb. ~ Rachel 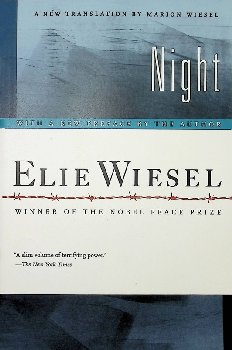