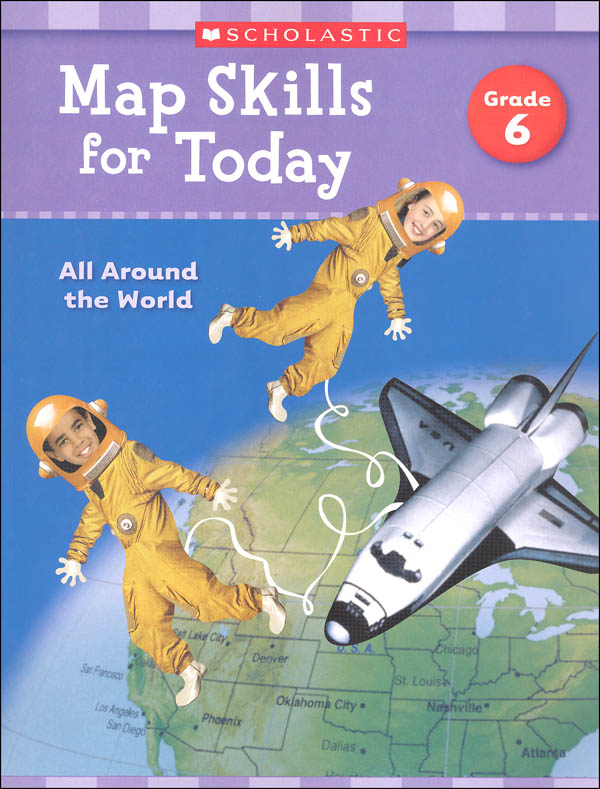 Highlighting sophisticated map-reading techniques such as projections, latitude and longitude, meridians and grids, and geopolitical borders, this activity book encourages students to think critically about how the world is organized, from Antarctica to the Indian subcontinent. Kids go even deeper by analyzing vegetation maps of Africa, worldwide locations of oil fields and population density, and maps showing rain forests.

Back in the catalog again, here is the classic map skills series, used by millions of students to build geography skills.  Each 32-page, full-color book teaches students to read and understand maps while acquainting them with geographic areas around the nation and world.  Each book contains location, direction, scale, symbol, creative thinking, and globe map skill activities along with activities covering language arts, social studies, and math.  All levels review map skills at the end of the book and grades 2-6 include an index of skills and understanding.  Each level builds on the previous level and introduces new topics  Answer keys are available through an online access, which is listed on the copyright page.

Primary Subject
History/Geography
Grade
6
ISBN
9781338214932
Format
Paperback
Brand Name
Scholastic
Weight
0.35 (lbs.)
Dimensions
10.88" x 8.25" x 0.12"
Powered by TurnTo
Questions that need answers | My Posts
Start typing your question and we'll check if it was already asked and answered. Learn More
Do not include HTML, links, references to other stores, pricing or contact info.
My question is about:

Powered by TurnTo
Review More Purchases | My Posts
5.0 / 5.0
1 Review
5 Stars
4 Stars
3 Stars
2 Stars
1 Star
1
0
0
0
0
I'm pleased with this series.
I like that this is an easy and inexpensive way to give my son a good map/geography background. It doesn't cover everything in social studies but it's great for maps and what it does cover. Each two page spread is an individual lesson and makes it easy to do. It's quick but to the point and all the answers for the lesson are found within that lesson.
December 4, 2019
Sara