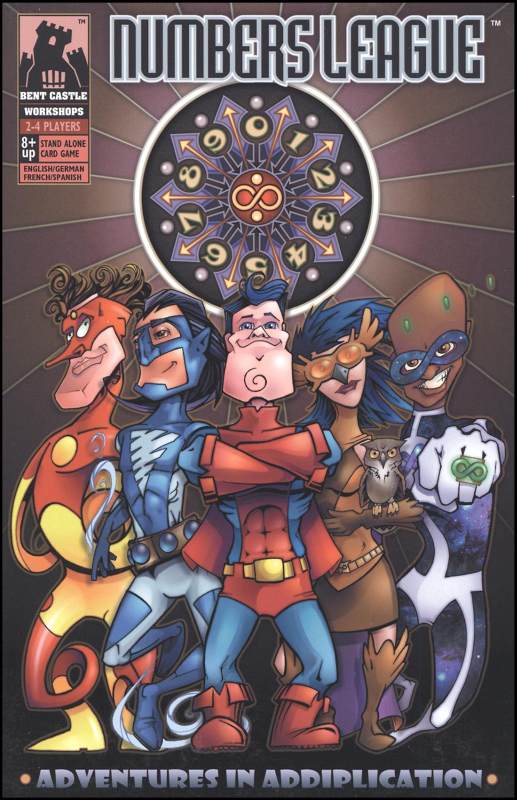 Here is your task: A plague of villains has descended on Infinity City. In Numbers League you are the leader of a team of superheroes in a quest to rid the streets of villainy. To do so, you must use the sum of your team's powers (using addition, subtraction, and multiplication) to save the day. This comic book inspired math game is loads of fun and is bound to get your little heroes excited about math! The deck of 120 cards comes with 75 Hero Cards (25 heads, 25 bodies, 25 legs), 21 Device Cards, and 24 two-sided Villain Cards. Here is how you play - lay down all the villain cards in the "Rogues Gallery," lay down three cards designated as the "Sidekick," and then each player begins with seven cards in their hands. Play moves clockwise, and each player's turn has three phases: action phase, capture phase, and energize phase. During action phase, you can either play up to two cards from your hand or return as many unwanted cards from your hand back to "headquarters" (the deck of heroes) and redraw, for a total of seven cards, thus ending your turn. If you choose to play two cards, you lay them on the table face up in front of you. Hero cards are used to build superheroes and they must consist of 1 head, 1 chest, and 1 leg card. You can only build one superhero at a time, and they cannot be altered once completed. You can also play a device card (such as a zap gun, which is worth a value of adding 15 or a Utility Belt which you subtract 5), which can be placed on a completed superhero to help them capture a villain. In the capture phase, you can try to capture one villain from the Rogues Gallery. Each villain has a "weakness number" that you must match in order to capture it. Use any or all of your completed superheroes, with or without devices to match a villain's weakness. If successful, you place the captured villain in your "trophy pile." The energize phase is when you end your turn by drawing enough cards from the Hall of Heroes to bring your hand back to 7 cards. Play continues until all villains have been captured. Each player adds the points of the villains in their trophy pile (this number is different than their weakness number), and the player with the highest total is the winner! This is just a brief explanation of this super fun game. There is also a sidekick aspect I left out, and more rules on how you can customize numbers league so you can play the "Superheroes Level."

If you love this game and are looking for an "added challenge," then I highly recommend the Infinity Expansion Deck. This deck will introduce 24 new villains (12 two-sided cards), 11 new superheroes (33 cards), and 15 new devices. To defeat the villains, you will need even more skill than before, as now you must use division and decimals to reach your target sums. Two additional expansion decks are also now available: Critters and Dinosaurs. These 30-card expansion decks feature themed creature cards to add more variety to your current hero, villain and device collections. Now, cue the superhero music and remember, it's up to you and your heroes to keep Infinity City free of villainy! - elise

Powered by TurnTo
Review More Purchases | My Posts
5.0 / 5.0
2 Reviews
5 Stars
4 Stars
3 Stars
2 Stars
1 Star
2
0
0
0
0
Rated 5 out of 5
So fun!
I play this with my six-year-old and we have a lot of fun! I enjoy watching him problem solve with complicated sums. He has fun building superheros. He begs to play this game!
August 4, 2020
Karleen C
Purchased
1 year ago
Rated 5 out of 5
I'd give this game two and a half stars Great appeal for boys in particular (though there are plenty of superhero women in the card deck too!) The artwork and superhero names are quirky and fun and the challenge of capturing villians nicely obscures the fact that the child is doing math :-) There are two levels at which the game may be played We have not yet tried the advanced level (more on that in a moment)At the basic level the goal is to capture villians by creating superhero/device combinations which add up to numbers from 3-26 Frankly repeated adding of 1s 2s 3s and 4s is not very challenging even with the odd +5 +10 or +15 of a device There is a little strategic thinking involved (the 16 villian is gone; how can I create a superhero that can capture the 17 villain instead?)At the advanced "superhero" level negative numbers come into play and I gather some multiplication Unfortunately I cannot tell because the instructions do not explain how to use these added features The instruction sheet says "Superhero Level brings in negative numbers addition of negative numbers and multiplication of both positive and negative numbers as well as Zero " but nowhere does it explain how I can infer how it might work but there's no clear explanation on the instruction sheetOnce my son is ready for multiplication I guess I'll do a web search for additional instructions (or make up my own rules)
November 20, 2014
Susan Papademetris 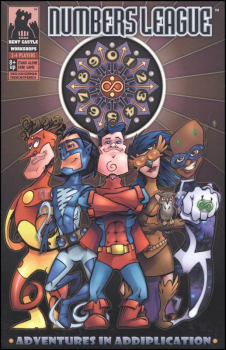