Includes 1 Plastic Pistol that has a working
hammer with an 8 shot cylinder, 20 #916
Soft Rubber Ammo, 3 stand up knock
over targets - 1 Can, 1 Bottle and 1 Snake.
Pistol is 12" Long. Pistol Imported from Italy.

Well, you might have the fastest draw this side of the Mississippi, but can you actually shoot? These sets feature plastic pistols with working hammer action. Each 11" weapon fires soft ammo caps from its 8-shot cylinder, and each set includes 3 cardboard targets with stands to knock over. "Hunter" includes a boar, snake, and bottle and "Wild West" contains a can, bottle, and snake. Targets range in size from about 2"x 5" to 7"x 4". 20 soft rubber bullets are included. Line 'em up and knock 'em down! ~ Megan 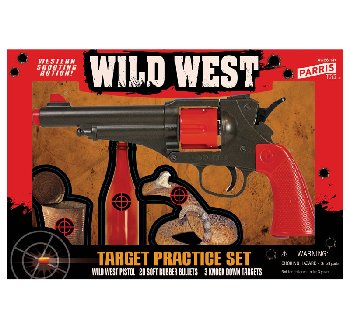