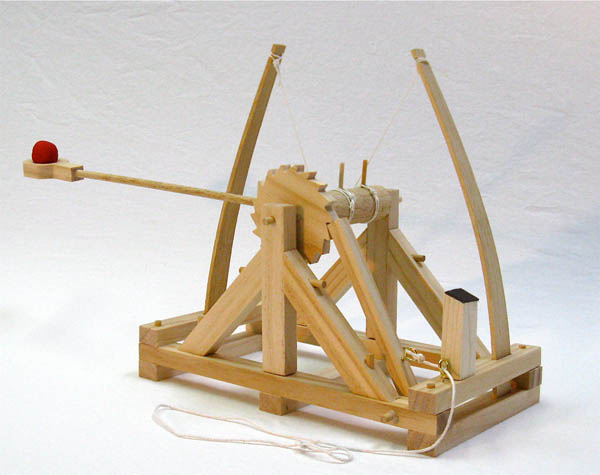 10 x 16 x 5.5. Designed by the master inventor himself, this small-scale replica throws small objects (less than 1" diameter) up to 15 feet.

Leonardo made two drawings of catapults in the codex Atlanticus, dated somewhere in the 1480's. While gun powder had been invented well before this, he seemed to understand that it wasn't always reliable and that catapults still had a place in warfare. The da Vinci catapult took and interesting turn (as it were), since none were made like this before that have been documented. Da Vinci was often pitching to kings and local lords (to whom he was employed), new ideas to protect their castles and improve their effectiveness in battle.

He made two designs, a single arm and a double arm. Tension arms would have used a laminated wood of some kind, but the tension on them would have been huge.

On the single arm there was a long pole that inserted into the drum so the swing arm could be put into firing position. It used a ratchet system where as the arm was pushed into position, a ratchet would prevent it from firing. Once in position, the release mechanism was pulled.

The double arm catapult used a different winding mechanism. It essentially is a worm screw that would slowly wind a large wheel (improving leverage) that would move the swing arm into position. It would be engaged in the wheel, wound, then when in position, a release mechanism would be engaged to hold the tension.

The worm ear would be lowered so it was not engaged, and the release mechanism would be tripped and off goes the projectile! The tension must have been enormous, and it has never been discovered if either of these models were ever made or used in battle.

Powered by TurnTo
Review More Purchases | My Posts
4.5 / 5.0
2 Reviews
5 Stars
4 Stars
3 Stars
2 Stars
1 Star
1
1
0
0
0
Rated 4 out of 5
Bit delicate
There isn't any room for error with no extra pieces, and the instructions are a bit of 'match up to the picture' so we had a slight issue putting it together. It worked after a few trials to see which way the string should go and which way the wheel spokes should face. It worked for the project, so no complaints.
April 27, 2018
Astraea
Purchased
over 2 years ago
Rated 5 out of 5
Leonardo da Vinci Catapult
I gave these as gifts, I've heard back from one person, he said he liked it. Shipped in time for Xmas, thanks.
January 3, 2018
Kim L
Purchased
over 3 years ago 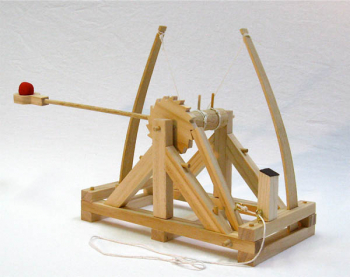