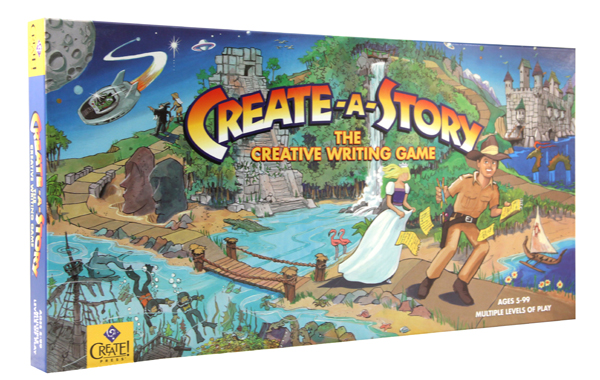 So, you're writing stories in English class, and your reluctant writer is whiny and reticent. "Why do we have to write stories? I can't think of anything!" If you can't get them out of their writing slump by suggesting "Well, let's brainstorm," or "Look around you for ideas," just say (with a twinkle in your eye) - "Forget it, let's just play a game instead." Of course, five or ten minutes later they'll realize they're not getting off the story-writing hook, but they'll probably be enjoying themselves so much they'll forget to pout. The game format is similar to most board games your family plays, with a large board featuring a wandering path from beginning to end. Besides a die, scoring pad and markers, the game features eight decks of story element cards and a story outline pad. Basically, as players move along the board, they will collect specific story element cards, and weave them into a story. Card decks are clearly labeled and include topic sentence, plot, character, setting, description, dialogue, lesson, and resolution cards. At the beginning of the game, each player receives a topic sentence. This is the only topic sentence card they will receive, and should be used towards the beginning of the story. As they roll the die, they will land on spaces labeled with the names of corresponding story element cards, and will draw the top card from the stack. By the end of the game, they should have at least one of each element card, and at least five description cards. Then, the writing begins! Choosing from their collected cards, the writer decides which cards he wants to incorporate into his or her story, and writes them onto the outline sheet. The outline begins with the topic sentence, and features blanks to fill in for each part of the story. Under "Setting", they must determine the "where", "when" and descriptors. Under character, they must identify the good guys and the bad guys, and describe both. For the plot, they must identify the problem, and decide on the order of events. Under "Resolution" and "Lesson", they will decide how the "Resolution" and "Lesson" cards they chose relate to their story, and how it all wraps up. Now, players each have a good framework for a story; the trick is now fleshing it out into an actual short story, which may be easier at this point, since a lot of the "unknowns" have been identified. A scoring sheet will help Mom decide if the story included all the necessary components, and will inspire kids not to skimp on the "less exciting" stuff. Since inventing characters, conflicts and settings sometimes takes a lot of steam out of even the more enthused young writers, I would imagine that taking that pressure off of them in this way would free up their imaginations to write a much more well-rounded, exciting story. I'll bet that even Mom and Dad will want to play this one! - Jess

These materials focus on writing practice and offer little to no writinginstruction.

That said we also played it at home.....even with Mom and sister it was Okay (which is great for a teen).
0
It depends on the kid. If they are already a strong writer, then maybe, but reluctant or struggling writers may appreciate the structure it provides. It can be fun for any age. I use it to challenge an older writer to "quick write" a short story. Also a good way to work with multiple ages at the same time.
Vote for the best answer above!

Powered by TurnTo
Review More Purchases | My Posts
5.0 / 5.0
6 Reviews
5 Stars
4 Stars
3 Stars
2 Stars
1 Star
6
0
0
0
0
Rated 5 out of 5
GAME FOR TEACHING
GREAT LEARNING GAME I"M TEACHING MY STUDENTS TO READ AND THIS GAME MADE LEARNING FUN
May 11, 2018
Ralph A
Purchased
over 4 years ago
Rated 5 out of 5
Really Fun!
I wasn't disappointed. The game was fun and it got my kids to make up wild stories. We laughed and they were not on electronics which made me happy!
May 7, 2017
Jennifer P
Purchased
over 5 years ago
Rated 5 out of 5
co op and home use
I bought this to use in a small co op class as well as home. My middle school children really liked it and really got into writing a story. We have not used it in a class yet, but I can see we would have to use two classes. The first to collect the cards and outline/notes and the second for the story and scoring. It helped my children to actually finish a story since they were not bogged down choosing so many elements.
August 15, 2016
Sandra G.
Purchased
over 6 years ago
Rated 5 out of 5
My girls have been playing this game for at least 5 years and they are 14 & 16 now! They love it and have a blast with writing the stories They think it's hilarious and are always laughing at each others stories First they have to choose cards from different piles on the board (for example one may be a "plot" card "setting" card "character" card etc and on the other side give an interesting plot or whatever that card is Usually they are quite funny) After they have collected their cards they do an outline (given questions they fill in the blanks) of what their story will have in it using the cards they picked up The challenge is how to tie the different ideas together Then they write their stories My girls don't like to let the other know what they are writing so it will be a surprise Then they get to read their story to each other and they have so much fun It makes writing fun like Mad-Libs makes grammar fun
August 3, 2014
Heather Davis
Rated 5 out of 5
I was having trouble getting my 8 year old to write anything This is so easy to use with no preperation My daughter is a hands on/visual learner I think it makes her "feel smart" as a writer She asks to play We spend one day playing the game and filling out the outline sheet Then she writes her paper the next day I am so excited to see her glow with satisfaction of completing a full written paper It's bringing her confidence out that yes - she CAN write It's a bit spendy But going from hating writing and no writing to enjoying and having fun writing is worth every penny to me
February 2, 2012
Wendy Renard
Rated 5 out of 5
This game is incredible! My 11 year old daughter and I love it The directions are easy to follow and no teacher prep is necessary This is really great for creative writing ideas The children play the game collecting cards for use in filling out an outline Then they write As a parent/teacher I have found this game to be challenging It's good for me to play the game and write as well as my children so I can really understand that it's not as easy as it looks It has been a treat to write with my daughter sharing our stories together I highly recommend this product Though it is pricey I have to say that it is indeed well worth the expense
December 8, 2008
Christina Li 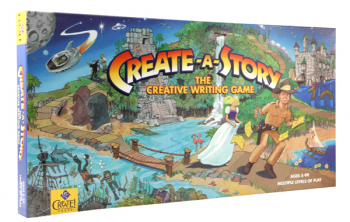