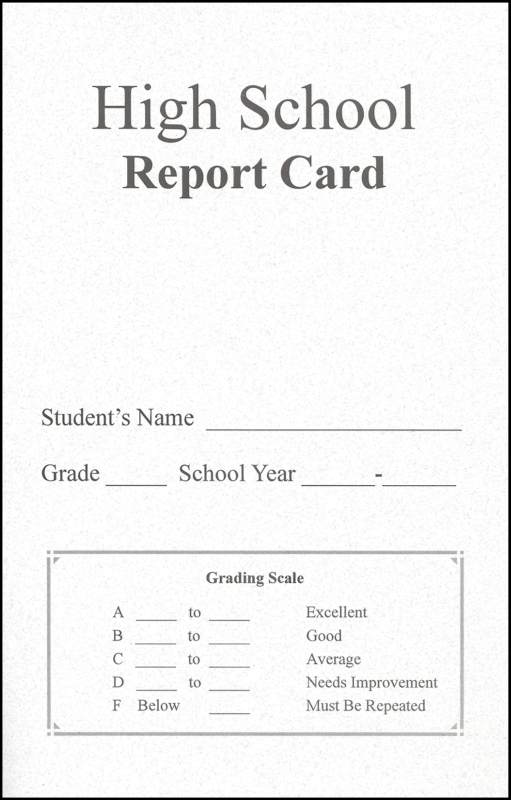 We have had numerous requests for a homeschool report card, and your pleas have been heard. This simple 5.5" x 8.5" report card is printed on sturdy gray cardstock that is folded in half. On the front, there is a picture of a red apple and blanks to record the student’s name, grade, and school year. Two versions of the original card are available; one has the Bible verse 2 Timothy 2:15 written on the cover and one has the famous quote by Plutarch, “The mind is not a vessel to be filled, but a fire to be ignited.” The insides of the report cards are identical. There is an academic progress chart on the left-hand side and a character development chart on the right. The academic progress chart lists seven subject areas (English, reading/literature, mathematics, history/geography, science, penmanship, and spelling) and four blank spaces to record additional studies. To the right of each subject are four blank boxes for you to record the grades earned in that subject each quarter of the year. Below the chart is a grading scale (90-100 earns an “A,” anything under 65 earns an “F”). The character development chart is very similar, but instead of school subjects, it lists personality traits (courteous, dependable, cooperative, truthful, willing attitude, hard working, kind, and appreciative). Below this chart is an explanation of the symbols used to “grade” their character – A=Achieved, I=Improving Steadily, and M=Making Some Progress. The backside of the card is blank aside from a short sentence with blanks stating that [name of student] has been promoted to the [?] grade under supervision of [Parent’s signature].

The front of the High School Report Card holds blanks to record the student’s name, grade, and school year, as well as a grading scale. The two inside pages are identical charts for two different semesters. There are spaces to fill in eight different subjects per semester, the grades earned for each quarter, the midterm exam, the final exam, and credits earned. The back page is a chart for listing the textbooks used that year. - Melissa 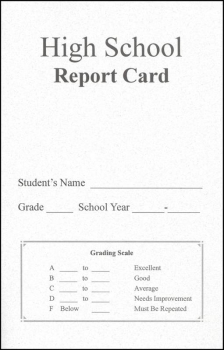