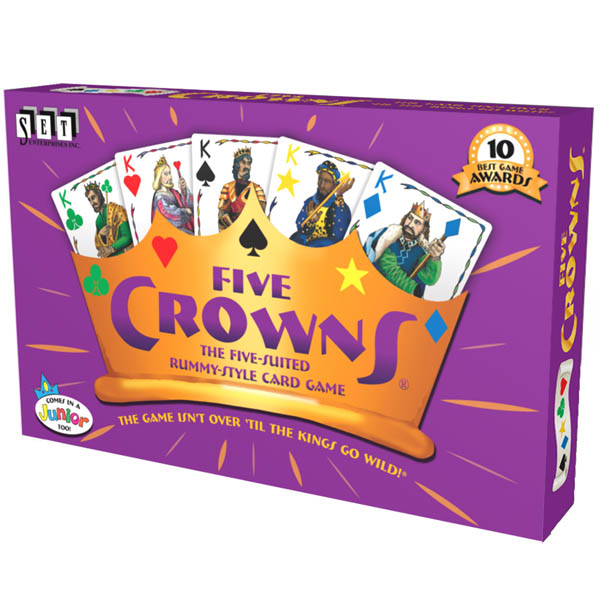 Another fantastic game by Set Enterprises! Adding a fifth suit to cards, the star, brings a new dimension to playing cards. 11 hands make up the game. Similar to rummy, you may lay down sets of three, called books, or runs of three or more cards. There's a twist to the game, though; in the first round, you get three cards, in the next round four, etc., all the way to the 11th round, in which you would get 13 cards. When a player plays his last cards, each other player has one more turn to play. ~ Steph

The game isn’t over ‘til the Kings go wild!®

Five Crowns is a five-suited rummy-style card game that appeals to a wide array of card players! This award-winning, classic game is a quick favorite features a unique double deck that contains five suits: spades, clubs, hearts, diamonds and stars! This special deck makes it easier to arrange your entire hand into books and runs. The rotating wild card keeps players on their toes! The game begins with three cards and 3s are wild, the next round has four cards and 4s are wild, and so on ‘til the Kings go wild! Make the right combinations, be the first to go out, then watch players scramble as they get one last chance to cut their losses! It’s a fun and addictive family game that provides great interaction for kids and adults! For 1 to 7 players.

Another fantastic game by Set Enterprises! Adding a fifth suit to a deck of playing cards, the star, brings a new dimension to playing cards. The game is made up of 11 hands. Similar to rummy, you may lay down sets of three, called books, or runs of three or more cards. There's a twist to the game, though - in the first round, you get three cards, in the next round four, etc., all the way to the 11th round, in which you get 13 cards. When a player plays his last cards, each other player has one more turn to play. For 2-7 players.

The mini round version of this game provides an option for quick play for 2 to 4 players. The deck has only 58 cards (half as many as the full size game), and you can finish a game in about 15 minutes. The same Five Crowns fun, but in a mini version. ~ Steph

Powered by TurnTo
Review More Purchases | My Posts
4.8 / 5.0
6 Reviews
5 Stars
4 Stars
3 Stars
2 Stars
1 Star
5
1
0
0
0
Rated 5 out of 5
Just what I was expecting.
One deck was to replace my previous deck, which was worn out from too much play. The second deck was a gift to a student who is struggling with addition and we use this game as a part of our math curriculum.
August 18, 2020
Susan K
Purchased
over 2 years ago
Rated 5 out of 5
Five Crowns Game
Very good game. Like it very much. Good buy.
August 18, 2020
Frank R
Purchased
over 2 years ago
Rated 5 out of 5
Great game!
This was a replacement because we have worn out the old cards. Great for adults - easy but fun!
April 23, 2020
Betsy D A
Purchased
over 2 years ago
Rated 4 out of 5
One of our favorite games.
We like this game so much, that this is the 5th or 6th deck I've bought, because we wear them out!
They are good quality, but they might last a LITTLE longer if the quality was supreme!
December 26, 2018
Robin H
Purchased
over 3 years ago
Rated 5 out of 5
We love 5 Crowns! It is challenging and fun, and one of our favorite family games. We purchased 5 Crowns this time for our married daughter and her family. Spreading the fun!
January 25, 2016
Brian F
Purchased
over 6 years ago
Rated 5 out of 5
Five Crowns has proven its space in the game drawer at our house One of mom's favorite spur-of-the-moment take-a-break games Always included on every camping trip or get-away This fast easy to learn game truly is a family/company favorite My younger ones have increased their speed in addition facts playing this often I knew it was a winner when after having this game in our home for over seven years my 21 and 19 year old sons grabbed the frisbee football and Five Crowns 'to go' when meeting friends their ages for some guy time
November 5, 2009
Abbe Adams 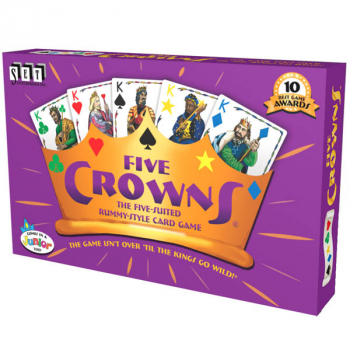