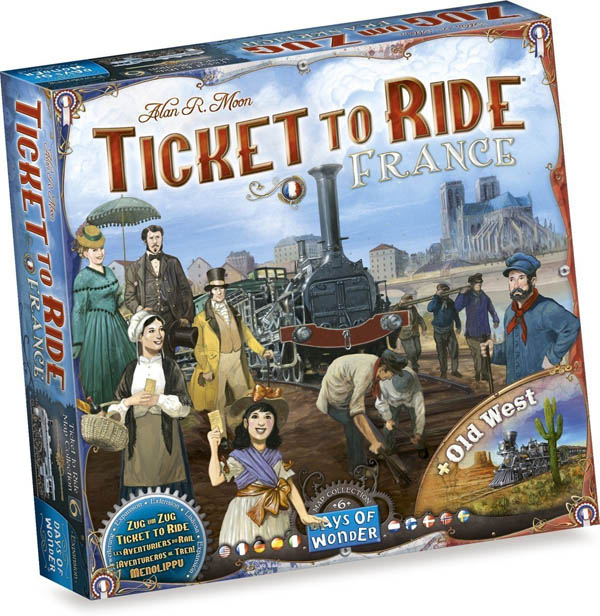 Double-sided board, with France on one side and the western half of the United States on the other. In the France half of this expansion, 2-5 players collect train cards and claim routes to complete tickets in hand.

Designed for 2-6 players, the Old West expansion presents a new challenge as you can no longer build track anywhere on the board; instead you must pick a starting city and expand from there.

Dive into thriving French culture during Impressionism and the Industrial Revolution; street cafes, "Starry Night", Paris boulevards, and Notre-Dame. The French railroad system is a blank canvas just waiting for your masterful strokes. However, before you can start claiming routes, you'll need to lay the tracks! Watch for your opponents, though, because they might claim the route you just spent so much time building...

This Ticket to Ride© expansion also includes the Old West map where up to 6 players develop their networks starting from their Home Cities. Claim cities along the way or take advantage of the other companies that have done the same. And who knows? Maybe you'll be able to solve the Roswell Mystery"

* Maps of France and the Old West

* A new set of trains

*Tickets & Rules for each Map

Primary Subject
Games, Puzzles & Toys
Grade Start
3
Grade End
AD
EAN
824968721285
Format
Other
Brand Name
Days of Wonder
Weight
3.65 (lbs.)
Dimensions
11.75" x 11.75" x 2.38"
Powered by TurnTo
Questions that need answers | My Posts
Start typing your question and we'll check if it was already asked and answered. Learn More
Do not include HTML, links, references to other stores, pricing or contact info.
My question is about:

Powered by TurnTo
Review More Purchases | My Posts
3.0 / 5.0
2 Reviews
5 Stars
4 Stars
3 Stars
2 Stars
1 Star
1
0
0
0
1
Rated 5 out of 5
Two good variations of the original game
Great addition to the Ticket to Ride collection. France is unique in that you must build a route before claiming it with trains. The Old West is very fun with needing to claim routes which are connected to your previously claimed routes. If you are looking for a variation on the original game, try this one.
September 27, 2021
Lori
Purchased
10 months ago
Rated 1 out of 5
Make sure you have trains and cards
Did not realize you had to have original version to play this game.
Make sure you have the trains and cards because the game does not come with it.
March 1, 2021
Holly N
Purchased
1 year ago 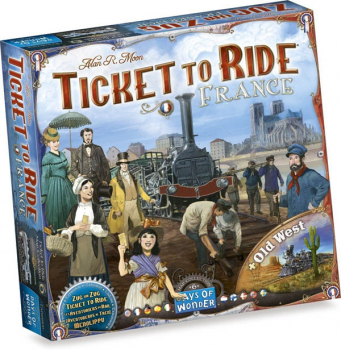